Comfortably Dumb: George W. Bush Tells Paper He’s ‘Comfortable With What I Did’

Comfortably Dumb: George W. Bush Tells Paper He’s ‘Comfortable With What I Did’ 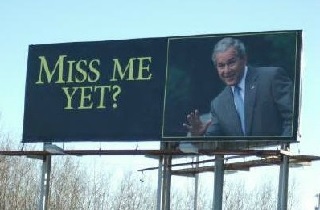 Despite having the distance of years and the benefit of hindsight, former President George W. Bush told the Dallas Morning News that he is still “comfortable” with the legacy of his presidency, and with who he is. With a legacy that includes the thousands killed in the unnecessary Iraq War, a botched war in Afghanistan, tax cuts and a Medicare drug benefit that were never paid for, and a financial crisis that nearly cratered the entire world economy, Bush still identifies the failure of Social Security privatization and immigration policy as his only regrets.

Despite the weird, intermittent attempts to rehabilitate the legacy of the George W. Bush presidency, his complete absence from the 2012 presidential race and near-absence from the 2008 campaign speak volumes about the degree to which even Republicans understand the radioactivity of that legacy. Rather than attempt to repair that legacy with a little bit of introspection, however, President Bush remains comfortably numb to the consequences of his presidency. From The Dallas Morning News:

He likewise reiterated his support for the wars in Afghanistan and Iraq, saying that he’s “confident the decisions were made the right way.”

Near the Iraq war’s 10th anniversary — as many stepped forward to revisit their criticism of the conflict — Bush made no mention of weapons of mass destruction, “enhanced interrogation techniques” or other controversies.

But he reflected on the “realities of the situation 10 years ago”: that the Iraq invasion had bipartisan support and that seeking regime change in Iraq had also been the policy under Clinton.

“It’s easy to forget what life was like when the decision was made,” Bush said.

Since he left office, Bush has been a punching bag for Obama, Democrats and even some Republicans. But while he said “nobody likes to be criticized all the time,” he brushed aside the constant pummeling.

A wiser politician, or a more perceptive person, might at lest try to acknowledge the tremendous costs of the Iraq War, and the mistakes that led us into it, while still trying to defend his own actions, but Bush shows no interest in joining the reality-based community.

Hardly a week goes by in which the cautionary echoes of the Bush presidency cannot be heard haunting the current political landscape, most recently in the dubious hype surrounding North Korea’s nuclear capabilities. The former president’s most positive political legacy is that of one of his lesser failures, relatively speaking; his name often comes up favorably in the discussion over comprehensive immigration reform.

Bush also told the paper that he’s not sure what, if anything, he’ll do with regard to brother Jeb’s presidential campaign, but he has been tapped to help out in at least one crucial political race: nephew George P. Bush’s run for Texas land commissioner. You couldn’t ask for a better bellwether of W’s influence, but maybe that’s the point. Maybe it’s better to be “comfortable” than good.