Mark Sanford on Ayn Rand in Newsweek: A Fountainhead of “Huh?”

Mark Sanford on Ayn Rand in Newsweek: A Fountainhead of “Huh?” 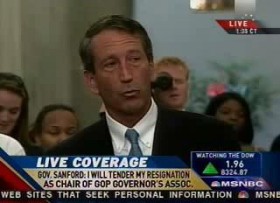 Mark Sanford wrote an essay on Ayn Rand for Newsweek this week. Yes, that Mark Sanford.

With how crazy it is that Sanford, Governor of South Carolina, is writing an essay about how useless government is to accomplish anything? Or with the irony of Sanford, who took off to South America to visit his mistress for five days while lying to his staff and the state he serves, writing about Objectivism — a philosophy centered on the Virtue of Selfishness? How about the fact that a resolution to impeach Sanford is hitting the South Carolina legislative floor on Tuesday? Missed that reference in the article. And let’s not forget the title of his essay: ATLAS HUGGED.

(I’m sure if Atlas had been in a romantic Argentinian hideaway, he would have done plenty of other stuff, too.)

The essay itself is fine — makes some decent, if banal, points about Rand’s primacy-of-the-individual schtick, demurs appropriately about how she leaves out compassion, affection and community, drops the obligatory Alan Greenspan reference (though in times like these, that’s not really a plus for the Randian position). But — there’s such a thing as context. And, well, it’s sort of hard to take Mark Sanford seriously on anything right now.

Mark Sanford may have at one time been considered a contender for the 2012 presidential race, but now he’s a national joke. His crazy disappearing act to Argentina launched hours of cable news coverage, a million Tweets, numerous solicitous press emails, and countless Evita references (he was crying! In Argentina!). “Hiking on the Appalachian Trail” has become a national punchline (Letterman used it in his affair-scandal comeback show; Mike Allen used it just this morning on Morning Joe in reference to those NorthWest pilots “using their laptops”). His rambling 18-minute mea-culpa press conference — complete with teary apologies to anyone and everyone plus tender appeals to amore — has become a TV classic. His wife’s writing a tell-all. The “Howard Roark standing naked on a cliff” jokes write themselves (assuming that the cliff’s in Argentina). See?

So — bearing all that in mind — it’s hard to just look at this piece and think, “Oh my! What a clever article about Ayn Rand!” Instead you think, “Why is Mark Sanford writing about Ayn Rand for Newsweek?” and then wonder how you can make an Argentina joke. (Someone cruder than I could find a way to work in ‘Galt’s Gulch,’ but this is a family publication.) But really, this piece has middling-to-no credibility, thanks to its source. In fact, it’s loaded with irony, thanks to how un-Randian Sanford’s behavior was. Yes, he did what he wanted (selfish!) — but would John Galt have groveled his way through an 18-minute press conference? Would Howard Roark have sniveled about how he was in loooove? No – he would have raped his way through that press conference* and then blown it up for good measure.

Never mind how ridiculous it is for a governor — agent of the collective, and paid by it — to disdain the notion of achievement by collective action. Roads and schools and social programs are built by teams of people; even an architect needs some help if he wants to see his building made. I mean, sheesh.

But actually, even though I am incredulous that this byline goes with this story, it’s also ironic, too, that therein lies its appeal: though “Atlas Hugged” was what initially caught my eye (great headline!), it was the byline that made me double-take. Poor Mark Sanford — he can dismiss the populist hack Ellsworth Toohey for only “writing what people want to hear,” but at the end of the day, he’s still basically just linkbait. Don’t cry for him though; Ayn Rand wouldn’t.

Related In Other John Galt-y Things:
Who Is John Galt? Writers Strike The Nerve That Counts: Public Opinion [ETP]