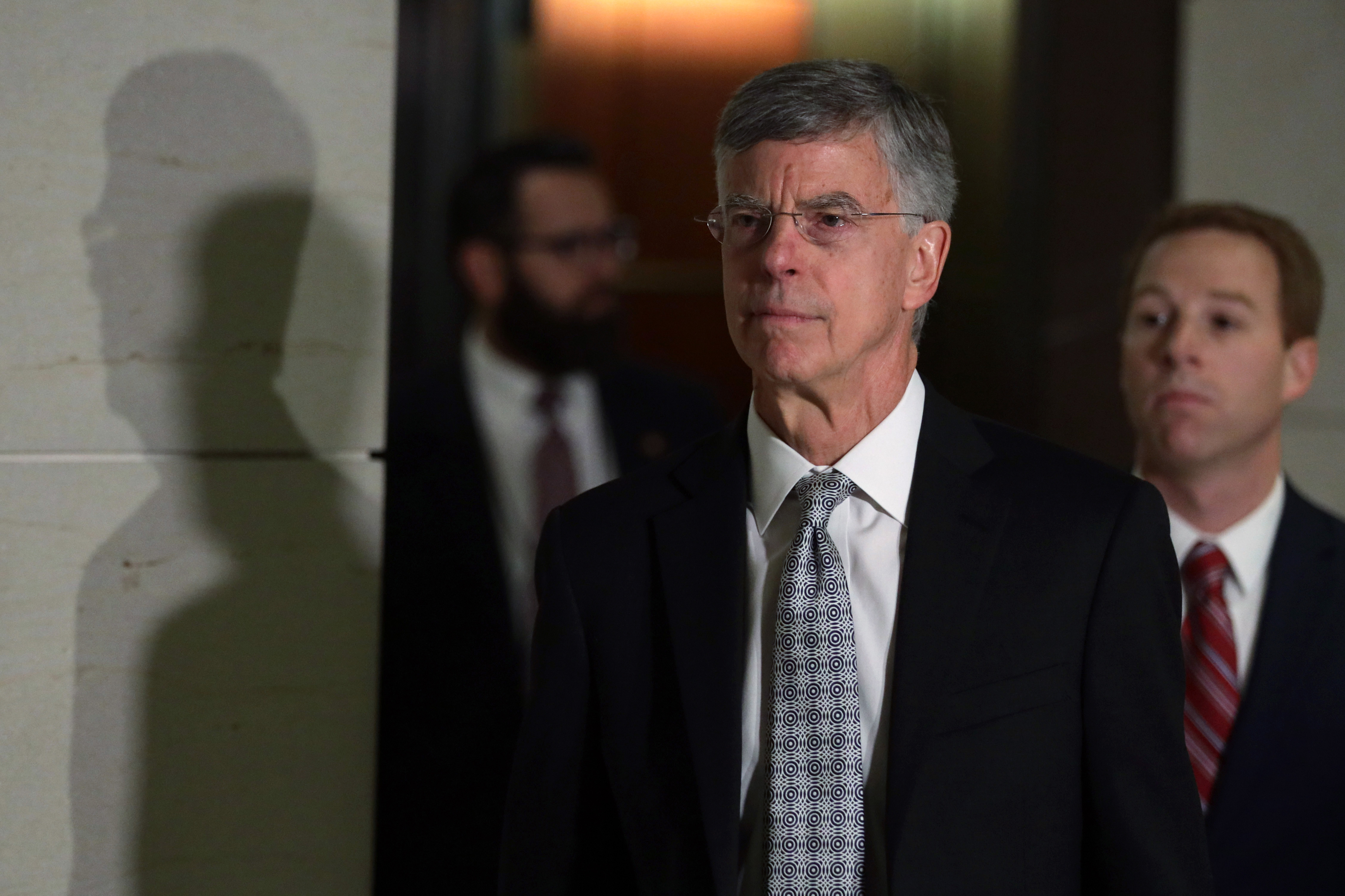 Top U.S. diplomat to Ukraine William Taylor delivered damning testimony against President Donald Trump while speaking before House investigators on October 22, a transcript of which was published in its entirety on Wednesday.

Taylor, a lifelong diplomat who served in the Vietnam War, confirmed numerous explosive allegations detailed in the whistleblower complaint — which triggered the House’s ongoing impeachment inquiry — regarding the Trump administration’s plan to pressure Ukraine into investigating former Vice President Joe Biden and his son Hunter Biden.

One portion of his testimony corroborated the claim that there was a quid pro quo expectation attached to $400 million of U.S. military aid bound for Ukraine. Taylor also confirmed that Trump’s personal lawyer Rudy Giuliani hatched the Biden investigation plot.

While commenting on the release of the transcript, House Intelligence Committee Chairman Adam Schiff (D-CA) took a victory lap on behalf of the Democratic-led impeachment inquiry: “Ambassador Taylor’s testimony reveals how, through a shadow foreign policy channel, Trump withheld military assistance and a White House meeting from Ukraine until Ukrainian officials agreed to announce investigations to help Trump politically.”

Below are five of the top takeaways from Taylor’s 324 page testimony:

1. ‘My clear understanding [was] security assistance money would not come until … the investigation’

On pages 189-190 of Taylor’s testimony, the diplomat discussed the administration’s special delegation to the Ukraine, which included Giuliani, Kurt Volker, Gordon Sondland, and Rick Perry, whose job in the country, as he understood it, was to negotiate the quid pro quo deal. After Chairman Schiff asked if “the security assistance – not just the White House meeting – was conditioned on the investigation” into the Bidens, Taylor replied, “That was my clear understanding, security assistance money would not come until the President committed to pursue the investigation.”

“So if they don’t do this, they are not going to get [the military aid] — that was your understanding?” Schiff followed, to which Taylor replied in the affirmative.

Earlier in the testimony, Taylor noted that it had become “clear to the Ukrainians that, in order to get this meeting that they wanted, they would have to commit to pursuing these investigations.”

“And [Ukraine Finance Minister Oleksandr] Danylyuk, at least, understood and I’m sure that he briefed President [Volodymyr] Zelensky,” Taylor explained on page 135 of the transcript.

Taylor pointed to Giuliani as the mastermind behind Trump’s quid pro quo plot with Ukraine, saying on page 259-260 of the transcript that “the origin of the idea to get President Zelenskiy to say out loud he’s going to investigate Burisma and 2016 election, I think the originator, the person who came up with that, was Mr. Giuliani.”

The diplomat was referencing Burisma Holdings — a Ukrainian natural gas conglomerate where Hunter Biden conducted supervisory work — and Giuliani’s intentions to have Zelenskiy investigate the company on corruption suspicions against Joe Biden. After Taylor was asked about “whose interests” Giuliani was “representing,” Taylor quickly replied with the obvious answer: “President Trump.”

On page 279-280 of the transcript, Taylor was asked by Rep. Ted Lieu (D-CA) about the impact that Trump’s delay on military assistance to Ukraine could have on both NATO countries.

“If the U.S. doesn’t give security assistance, it could in effect embolden the Russians to be even more aggressive towards Ukraine. Isn’t that right?” the lawmaker asked.

At one point during the months-long whirlwind of negotiations with Ukraine over military aid, Taylor threatened to quit over concerns that withholding such assistance could grant Russia an advantage in the region: “The Russians want to know how much support the Ukrainians are going to get in general, but also what kind of support from the Amecans. So the Russians … would love, the humiliation of Zelensky at the hands of the Americans, and would give the Russians a freer hand, and I would quit.”

In response to a question about why such a scenario would make him quit, Taylor said he informed Secretary of State Mike Pompeo on May 28 that he supports the administration’s “strong policy of support for Ukraine,” but included the disclaimer: “If that changes and this would have been a change, this would have been — it was a nightmare. This would have been throwing Ukraine under the bus. And I told the secretary, If that happens, I’ll come home. You don’t want me out there, because I’m not going to defend it, you know. I would say bad things about it.”

In one amazing aside, Trump’s proposed plan to purchase the massive Danish island Greenland made a cameo in Taylor’s comments.

On page 133 of his testimony, Taylor began discussing the National Security Council and noted that a number of officials were tied up on various projects and trips outside of Ukraine, including the president’s outrageous Greenland pipe dream.

“It turns out, Mr. Chairman, that those principals, as we call them, were on different trips at different times. I think this was also about the time of the Greenland question, about purchasing Greenland, which took up a lot of energy in the NSC,” Taylor explained.

After Schiff replied by calling the Greenland issue “disturbing for a whole different reason,” Taylor shrugged off the rabbit trail as just a “different story.”