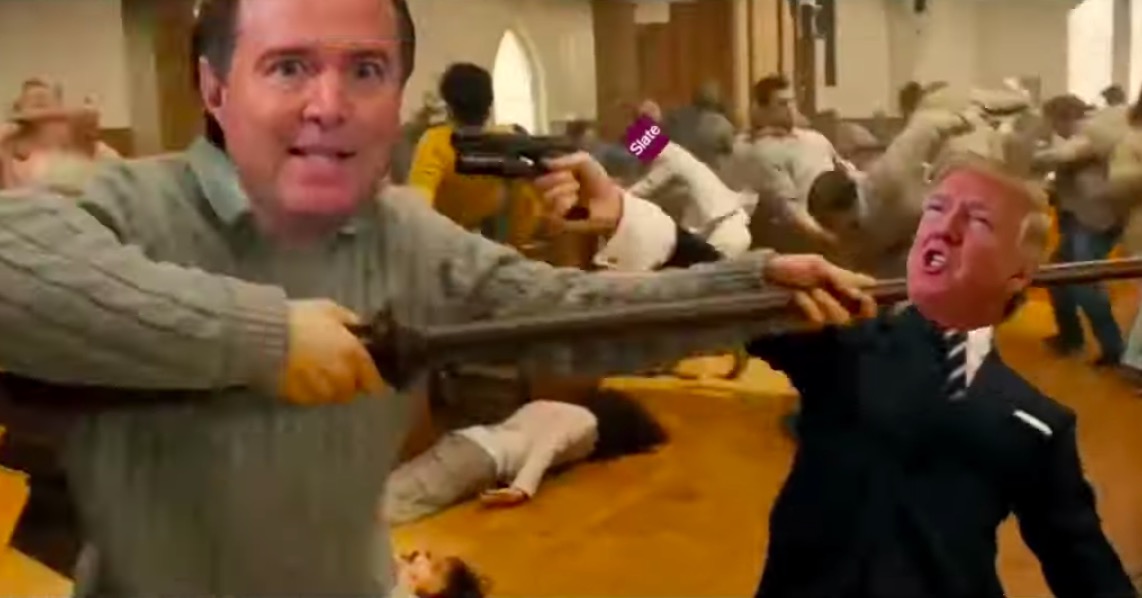 During a right-wing conference last week that was attended by Trump allies Sarah Huckabee Sanders, Donald Trump Jr., and Ron DeSantis, event organizers showcased a macabre video depicting Donald Trump gunning down and stabbing a number of his political and media opponents, according to a New York Times report on Sunday.

The clip took a famous fight scene from the 2014 film Kingsman: The Secret Service, which features the movie’s protagonist killing a number of people gathered inside a church, and edited it to superimpose the president’s face onto the gunman; the bystanders killed in the scene — who the clip referred to as members of the “Church of Fake News” — were edited to represent Trump’s enemies in the press, the Democratic Party, and progressive movements like Black Lives Matter. Nearly every major news organization, aside from Fox News, was featured in the video and were subsequently shown being violently assaulted, including the Washington Post, NPR, NBC, Politico, Talking Points Memo, the Young Turks, and PBS.

The NSFW clip, which was originally posted to YouTube last year and can be viewed below, included a watermark with the Trump campaign seal, but the president’s top surrogates present at the American Priority conference denied being present when it aired.

American Priority’s Alex Phillips, who helped organize the event, brushed off concerns about the video by insisting that it was simply one section in a pro-Trump “meme exhibit.”

“Content was submitted by third parties and was not associated with or endorsed by the conference in any official capacity,” Phillips told the Times. “American Priority rejects all political violence and aims to promote a healthy dialogue about the preservation of free speech. This matter is under review.”

While Sanders, the recently departed White House press secretary, attended the conference and spoke during a prayer breakfast at the venue, she claimed to have had no prior knowledge of the macabre video.

“I was there to speak at a prayer breakfast, where I spoke about unity and bringing the country together,” Sanders said. “I wasn’t aware of any video, nor do I support violence of any kind against anyone.”

Trump 2020 campaign spokesman Tim Murtaugh attempted to distance the president from the clip: “That video was not produced by the campaign, and we do not condone violence.”