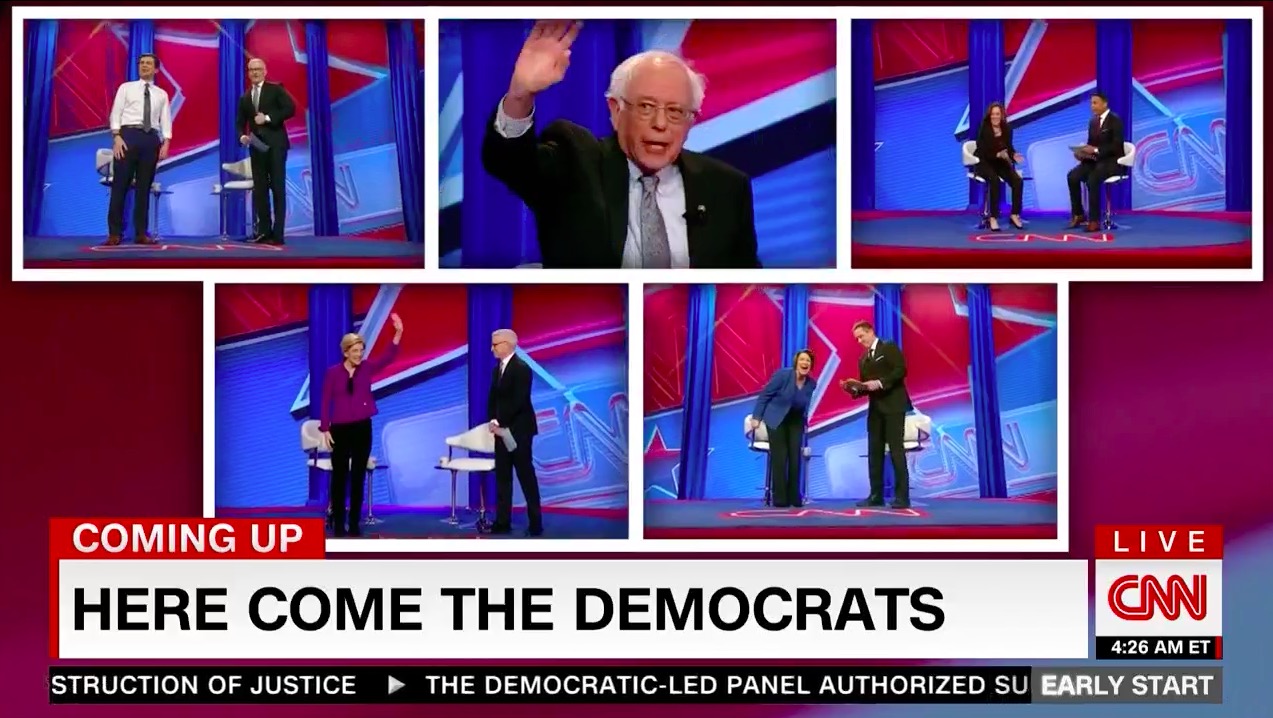 CNN devoted five straight hours Monday night to a series of town halls with some of the top contenders running for president in 2020. The marathon session was our best look yet into the policies, quirks, strong spots and weaknesses of five select candidates: Amy Klobuchar, Elizabeth Warren, Bernie Sanders, Kamala Harris and Pete Buttigieg.

The candidates fielded questions from a series of college students on topics ranging from President Donald Trump’s impeachment to student debt, socialism and foreign policy. Here are five takeaways from the town halls.

Thanks to Bernie Sanders, felony voting rights are now a primary issue

Sanders got the party started on this issue, laying out his argument for why felons and those currently incarcerated should vote. That prompted a spicy question from CNN’s Chris Cuomo, who asked if that freedom should be afforded to those convicted of rape or even the Boston Marathon bomber.

CNN asked Harris the same question. She was a definite yay on re-enfranchising felons after they leave prison. When pressed on voting rights for the currently incarcerated, Harris delivered a line that reverberated across Twitter: “I think we should have that conversation.”

South Bend Mayor Pete Buttigieg was less keen to follow Bernie’s lead: He was a firm NO on those currently in prison being allowed to vote. He supported restoring voting rights for those released from prison.

Democrats are split on impeachment

CNN’s anchors made sure to ask every candidate where they stand on Trump’s impeachment.

Warren earned herself serious plaudits from Democrats for coming out swinging on the issue:

“There is no political inconvenience exception to the United States Constitution,” Warren said. “If you’ve actually read the Mueller report, it’s all laid out there … If there are people in the House or the Senate who want to say that’s what a president can do when the president is being investigated for his own wrongdoings or when a foreign government attacks our country, then they should have to take that vote and live with it for the rest of their lives.”

Clips of her fiery response to the question of impeachment went viral on Twitter, and are a good sign that the progressive senator should not be counted out due to lagging poll numbers just yet.

Harris made news by calling on Congress to initiate impeachment proceedings, pointing to ample evidence of obstruction of justice in the Mueller report.

The other three candidates were less eager. Klobuchar punted, saying the matter is up to the House. Sanders called for a “thorough investigation” by House Democrats of Trump. Buttigieg said Trump has “made pretty clear he deserves impeachment,” but added he would leave the decision up to Congress.

Two big moments that showed off how these candidates work a crowd were on stark display Monday night. The first, came courtesy of Klobuchar, as she made the case for her political prowess in red districts.

“Every single time I have run, I have won every single congressional district in my state, including Michele Bachmann’s,” Klobuchar said. After a pause, she added: “That’s when you guys are supposed to cheer, OK?”

The CNN audience — made up of college kids — can be forgiven. They may not have been politically active when Bachmann, Minnesota’s right-wing congresswoman, served in office from 2007-2015. Klobuchar can also be forgiven — she certainly played off the moment better than Jeb! … But it was very close for comfort.

Buttigieg, meanwhile, earned himself thunderous applause for a question he refused to answer.

The openly gay mayor was asked about his war of words with Mike Pence. That earned him a broadside from U.S. Ambassador to Germany Richard Grenell, who accused Buttigieg of pushing a “hate hoax” against the vice president.

When asked about Grenell’s remark, Buttigieg had a line at the ready:

“I’m not a master fisherman, but I know bait when I see it, and I’m not going to take it,” he said. That response drew one of the loudest applause of the night.

There’s a running joke amongst political reporters that darling candidates go through a cycle: first, they are adored by the media and treated to countless fawning magazine profiles. Those profiles eventually become overkill — Beto O’Rourke’s coverage jumped the shark with his Vanity Fair cover shot by Annie Leibovitz — and the once-adored candidates begin to face harsh scrutiny from reporters on their records.

After months of fawning coverage, Buttigieg might be in the midst of a scrutiny phase. Notably, at his town hall Monday night, the mayor was asked about his 2012 decision to dismiss South Bend’s first black police chief, Darryl Boykins.

Boykins was fired over allegations he improperly recorded phone calls of officers using racist language. Buttigieg was asked point blank what was on the tapes, which were never released publicly. “The answer is I don’t know,” he replied.

Buttigieg conceded he was “slow to understand how much anguish” the ordeal caused. “It was about whether communities of color could trust that police departments had their best interests at heart.”

It was a sensitive response, but the question itself is a sign of the hurdles Buttigieg will face as the 2020 race heats up.

Despite ample time in the hourlong town halls, foreign policy was not a centerpiece of questioning. Sanders still managed to make news when he was asked how he will “maintain the strong US-Israel relationship” despite his harsh criticisms of Benjamin Netanyahu, just re-elected as Israel’s prime minister.

Sanders boasted of his own personal ties to the country, arguing he is not “anti-Israel.”

“But the fact of the matter is that Netanyahu is a right-wing politician who I think is treating the Palestinian people extremely unfairly,” he said. “The United States gives billions of dollars in military aid to Israel. What I believe is not radical. I just believe that the United States should deal with the Middle East on a level playing field basis.”

And then: “In other words, the goal must be to try to bring people together and not just support one country, which is now run by a right-wing, dare I say, racist government.”