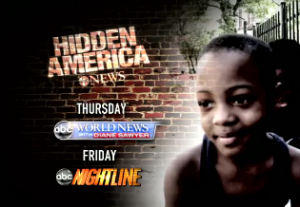 ABC News is airing a series of special reports about gang violence in Chicago on ABC World News with Diane Sawyer and Nightline. Hidden America: Don’t Shoot, I Want to Grow Up airs Thursday and Friday night.

Sawyer and Chicago-based correspondent Alex Perez “facilitate a solutions-based discussion between members of several rival gangs to see what, if anything, can be done to reverse the alarming pattern of violence and murder in the streets,” according to the network.

Perez, a Chicago native, has personal ties to the issue, having lost a childhood friend to gang violence, an experience that he wrote about. But “there is no way to compare Joaquin’s death to that of the innocent victims who had zero connections to gangs and still lost their lives,” he writes. And this special is a means to “move the conversation forward.”

It is a nightmare unimaginable to most parents – a type of war currently happening in one of America’s proudest cities where it is possible for a seven-year-old girl to be gunned down while selling lemonade. The place is Chicago and the war is among the young men and women who themselves say they exist in a kill or be killed reality unfathomable to most of the country.

In an unprecedented series of special reports, ABC News will take a closer look at the violence plaguing America’s third-largest city. ABC’s Diane Sawyer and Chicago-based correspondent Alex Perez facilitate a solutions-based discussion between members of several rival gangs to see what, if anything, can be done to reverse the alarming pattern of violence and murder in the streets. Former NBA all-star Isiah Thomas joins the conversation, challenging the youth of his hometown to find a peaceful resolution. In addition, ABC News goes inside an event deemed the “PEACE Basketball Tournament” where for one-day members of rival gangs were brought together by their common love for the game to battle it out on the court rather than the city’s streets. Local social activist Father Michael Pfleger organized the event and was joined at the event by several NBA players hoping to send a message to the community’s youth to stop the violence. The reports air Thursday, October 18 on “World News with Diane Sawyer” and Friday, October 19 on “World News” and a special edition of “Nightline.”

The statistics are staggering – the FBI is reporting there are 1.4 million active gang members in the United States and a 40 percent increase in gang related activity from 2009 to 2011. This year along there have been more than 400 people killed in Chicago, marking more lives lost there than soldiers killed in Afghanistan.

“Diane Sawyer and her Hidden America team have done it again — shining a new light on stories of violence, struggle and hope in Chicago while searching for answers to one of the most vexing problems facing our country,” ABC News President Ben Sherwood said.

“The team has devoted months to researching, interviewing, and filming for this series of stories, and they are told with Diane’s signature brand of tough reporting and finely tuned sensitivity. We were overwhelmed by the reception we got in the Chicago community and our hope is this will be the beginning, not the end of an important conversation in communities across the country,” said “Nightline” Executive Producer Jeanmarie Condon.

“Hidden America” is a division-wide series of reports aimed at shining a light on the people, places and stories of struggle and hope that are not well known or apparent to many Americans. The reports also spotlight the creative and innovative things some extraordinary Americans are doing to help people in their communities. This long-term commitment grows from Diane Sawyer’s remarkable and award-winning “Hidden America” documentaries on Camden, Appalachia, and Pine Ridge.

A clip of Sawyer’s reporting below, via ABC: