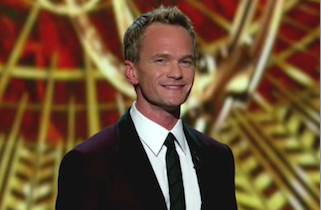 Last week, producers Craig Zadan and Neil Meron announced that Neil Patrick Harris will host the 82nd annual Academy Awards on Sunday, February 22, 2015. Harris has hosted both the Tony Awards and the Emmy Awards over the last few years and was recently rumored as a possible replacement for either David Letterman or Craig Ferguson on CBS. But now, it has been revealed that he was not the Academy’s first choice.

According to The Hollywood Reporter, Zadan and Meron first reached out to Ellen DeGeneres, who helped bring some added social media buzz to last year’s show. After she declined to return, they went to Chris Rock, who previously hosted in 2005.

Then, in an inspired move, the pair approached Julia Louis-Dreyfus, who is known for her indelible award show moments.

Then, after all that, the producers turned to Neil Patrick Harris, who was apparently their fourth choice. Nonetheless, they said in a statement, “”We are thrilled to have Neil host the Oscars. We have known him his entire adult life, and we have watched him explode as a great performer in feature films, television and stage. To work with him on the Oscars is the perfect storm, all of his resources and talent coming together on a global stage.”

Given the fact that the Oscars will air on ABC next year, THR’s Seth Abramovitch wonders why the network’s late night star Jimmy Kimmel was not in the running. He had a relatively successful experience hosting the Emmys in 2012, but has never been given a shot at the Oscars, as other late night hosts like Letterman and Jon Stewart have in the past.