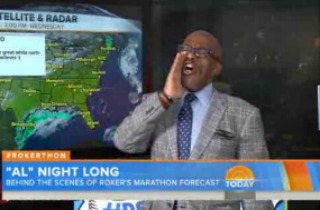 NBC weatherman Al Roker is trying to set a record for the longest uninterrupted weather report in history, and he plans on continuing for 34 hours straight. Roker started at 10:00 p.m. last night, and apparently some interesting things happened overnight.

If you were watching the livestream overnight, you might have noticed — aside from Roker’s usual banter — a particularly odd occurrence when he took a break to use the bathroom.

The evening’s most memorable moment came when Al took his first bathroom break — with his microphone streaming sound to viewers. Al’s take on the moment: “Live stream has a new meaning.”

Tuned into see @alroker ,seems like the mic was still on while in the bathroom, ops. It happens, but u go Al, break that record! #rokerthon

Well, @alroker don't forget to turn your lav mic off when you use the bathroom! #rokerthon @TODAYshow thanks for the weather!

Uhhh Al Roker is in the bathroom and his microphone is definitely not off. #Rokerthon

21 hours to go, Al! But even if you can’t get through all 34 hours, it probably won’t be as embarrassing as this was.

Watch a roundup of the overnight nuttiness below, via NBC:

You can watch the ongoing livestream below: