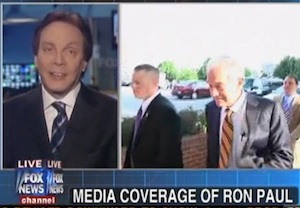 Libertarian energizer bunny Ron Paul‘s presidential campaign is getting more than enough media coverage according to radio host Alan Colmes. Fox News host Jon Scott noted that Paul was polling 2nd in Iowa with 18%, ahead of Mitt Romney in a new Des Moines Register poll and asked Colmes if the plucky free-market firebrand was being overlooked by reporters. “I don’t agree with the premise, he’s in every debate, I have him on my radio show a lot, I’ve seen a number of segments not just here about how the media doesn’t talk about Ron Paul well they’re talking about Ron Paul!” argued Colmes. “People know who he is if you’re following this stuff and that’s maybe one of the reasons why he’s doing well because people do know who he is and he does resonates with a good percentage of the Republican electorate. I don’t think he can get the nomination because he deviates too far from establishment Republicanism: anti-war, legalized drugs, whole series of positions that are too libertarian for the Republican Party but here we are giving him media attention about not giving him media attention!”

The National Review‘s Rich Lowry didn’t think Herman Cain supporters would flock to Paul, thinking Newt Gingrich would be the more logical beneficiary but did agree the media was ignoring Paul.

“On the merits, you look at his standing in the polls, you look at the kind of fundraising he’s doing, you look at the kind of organization he has on the ground and he is not getting the media attention commensurate with all of those things,” Lowry observed. “The most notorious example was he came in second in the iowa straw poll, a traditional, significant winnowing event in the republican season, and there was a notorious headline that says Michele Bachmann finishes first and Tim Pawlenty finishes third, totally skipping over ron paul and I think the reason for it is that people I think — at the end of the day — don’t think he has any chance of getting elected president…but if you look at all those indicators and he’s not getting his fair share.”

Scott countered Colmes dismissal by noting that supporters were “fervent.”

Colmes acknowledged that many liberals sympathized with Paul’s views on the Patriot Act and other positions, he even revealed that he called himself a ‘liberal-tarian’ , agreeing with him sometimes. “One of the reasons that Rich may have a point is that he’s outside of the Republican mainstream and therefore is not taken in some quarters as seriously as he should be.”

“That’s the nicest thing that Alan has ever said about me,” Lowry joked. “That I might have a point.”