Amid Backlash, Petition Calls On CNN To Apologize On Air For ‘Sympathizing’ With Steubenville Rapists 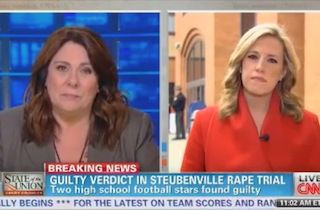 On Sunday, the Steubenville rape trial concluded with the judge finding two high school football players — Trent Mays, 17, and Ma’lik Richmond, 16 — guilty of raping a 16-year-old girl. The case itself has received a widespread coverage, but after the verdict was handed down, CNN became part of the story due to reporting “sympathetic” with the accused. A petition, with more than 30,000 signatures, is asking for a public apology from the network.

The petition criticizes the network for “sympathizing” with the rapists rather than the victim:

That CNN decided to paint the tears of the convicted Steubenville rapists in a sympathetic light and say how their lives were ruined — while completely ignoring the fact that the rape victim’s life is the one whose life was ruined by these rapists’ actions — is disgusting and helps perpetuate a shameful culture in which young people never understand the concept of consent and in which rape victims are blamed and ostracized.

CNN host Candy Crowley spoke about how emotional the atmosphere in the courtroom must have been, turning to correspondent Poppy Harlow, who responded:

I’ve never experienced anything like it, Candy. It was incredibly emotional — incredibly difficult even for an outsider like me to watch what happened as these two young men that had such promising futures, star football players, very good students, literally watched as they believe their life fell apart.

One of — one of the young men, Ma’lik Richmond, when that sentence came down, he collapsed. He collapsed in the arms of his attorney, Walter Madison. He said to me, “My life is over. No one is going to want me now.”

This prompted Crowley to inquire further:

The thing is, when you listen to it and you realize that they could stay until they’re 21, they are going to get credit for time served. What’s the lasting effect, though, on two young men being found guilty in juvenile court of rape, essentially?

For that insight, Harlow handed it off to legal contributor Paul Callan, who spoke about the “lasting impact” it will have on those football players:

But in terms of what happens now, yes, the most severe thing with these young men is being labeled as registered sex offenders. That label is now placed on them by Ohio law and, by the way, the laws in most other states now require such a designation in the face of such a serious crime.

This discussion was interspersed with footage of Mays and Richmond sobbing in court, which Harlow deemed “hard to watch.” After Callan’s assessment, Crowley jumped back in to note that the girl’s life will never be the same again.

It didn’t take long to see the backlash, especially on Twitter, much of which was directed at Harlow for her “shameful,” “poor rapists” mentality. (Storify has a sampling of the reaction here.) Jezebel and Gawker also weighed in with a critical take, with the former offering up a piece on what CNN should have said.

Over at the Huffington Post, Kia Marakechi asserted that “it’s telling that this tone continued over multiple segments, despite a cadre of tweets and blog posts deriding the network’s earlier coverage.” With a hefty number of signatures already, it won’t be surprising to the petition gain many more.