Anderson Cooper Laughs at Himself for Believing ‘Stupid’ ClickHole Parody 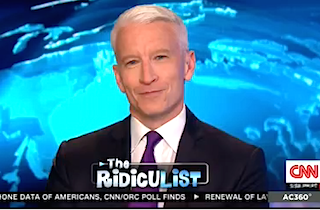 For his “Ridiculist” segment Monday night, CNN’s Anderson Cooper poked fun at the former FIFA official who used an article from The Onion to defend the governing body of soccer against a massive U.S. corruption indictment. But lest anyone accuse him of hypocrisy, Cooper also addressed that time last month when he too fell for a parody from ClickHole.

“This guy, he was the vice president of FIDA, surely maybe he should have known better,” Cooper said. “And really, what person with internet and a printer doesn’t know that The Onion is a satirical site at this point? It’s not like it was, oh I don’t know, ClickHole.”

“I just didn’t think it was that funny, I just thought it was a stupid thing, and it annoyed me that someone may think I actually said a stupid thing,” Cooper explained. “I didn’t know what ClickHole was. I mean how am I supposed to keep up with what the kids are doing?”

Unlike FIFA’s Jack Warner, who actually made a video in which he held up a printed copy of The Onion article, Cooper merely tweeted this message at ClickHole:

Ummm… @Clickhole, do u make this stuff up? I never said this quote and never spoke to the NYU class of 2015. https://t.co/oRSDgpQXxx

“I just tweeted at them, I tweeted, ‘do you make this stuff up?'” Cooper said. “Which of course, as it turns out, yeah, they do. Because that’s their job, since they are a parody site owned by The Onion. So, maybe I shouldn’t throw stones at the FIFA guy.”