Ann Coulter: My Dog Knows More About The Arab World Than Obama Does 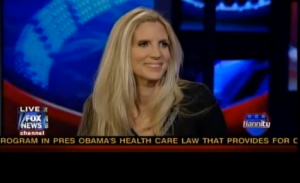 As usual, Coulter was quite quotable when offering her views on the matter:

For one thing, I noticed that all the people who say we don’t need to see the photo have themselves seen the photo. This was not a personal crime against the Barack Obama family, this was an attack against the United States of America, and for ten years, Americans – at least 200 million Americans, Liberals were burning candles and singing folk songs – but 200 million Americans have been waiting to personally place the bullet in Osama bin Laden’s head. We paid for it; we ought to be able to see it.

Secondly, and perhaps more important… You know, this President prides himself on his indigenous quality and saying “Pah-kee-stahn,” but he seems to know less about Arabs than, you know, my dog. Certainly this Irishman from Long Island knows more. First of all, I don’t care particularly that they’re going to have conspiracy theories – Who cares what they think? – and yet, and still their leaders are constantly lying to them. Conspiracy theories are rife in the Arab world; they will believe this is a fake otherwise. Secondly, as we know from the way Arabs treat their own people and what Osama bin Laden himself said – “If a man sees a strong horse and a weak horse, he will naturally favor the strong horse” – Arabs admire power and strength. They personally consider themselves inferior until they see that America did this to Osama bin Laden. They’ll still look up to him; they’ll still be afraid he’s out there. When they see that America put a bullet through his head, they’ll turn on him like that. [Snaps.]

Hannity then brought up the same talking point he’d discussed earlier with guest Oliver North [Ed. note: Thus confirming my suspicion that Hannity was quite keen on having someone agree with his take on the matter.], asking whether the administration was sending the wrong message by giving bin Laden the respect of a traditional Muslim funeral despite the pervading argument that the man is not, based on his actions, a true Muslim. Well, Coulter didn’t bite either. “No, I’m in favor of that. That’s the military doing it.” She added that it just goes to show how respectful our military is. Poor Sean, man.

Also, if you ever wandered what Coulter might be like at Guantanamo, you now have your answer. And “something something Hillary Clinton‘s ankles.”

Check out the segment, via Fox News: