Author Of Book On 2012 Election: ‘Without Media Bias, America Would Vote Like Texas Or Kentucky’ 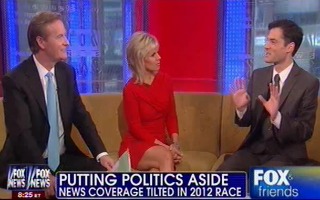 On Tuesday, David Freddoso, author of Spin Masters, How the Media Ignored the Real News and Helped Reelect Barack Obama, joined the hosts of Fox & Friends to discuss pro-Democratic media bias in 2012 and beyond. The author detailed the case against the media in this interview and in a recent column for the New York Post in which he quotes a political scientist who attributes much of the nation’s support for Democratic politicians to the pro-Democratic coverage of politics in the mainstream media. Without that biased media, the author and the political scientist say, the nation’s voting patterns would more closely mirror any typical red state.

RELATED: Steve Kroft On His 60 Minutes Interview: Obama ‘Knows We’re Not Going To Play Gotcha With Him’

Freddoso opened by admonishing Steve Kroft and CBS after the reporter admitted that the president appeared on CBS because he knows they will not “play gotcha” with him. “It’s amazing,” Freddoso said.

“It just looks like CBS has a dog in that race,” Steve Doocy said.

“My old boss, Bob Novak, used to say, ‘a reporter is someone who would sell his soul for a story,’” Freddoso continued. “It’s just that when the story would make Barack Obama look bad or his presidency look like a failure, there is a sudden total lack of journalistic curiosity and unwillingness to sell one’s soul for a story.”

“Really big stories like Benghazi became non-stories,” he added. “Editorial judgments were made to play these things down.”

Freddoso noted that coverage of the unemployment crisis in Obama’s first term was also poor. “We always hear about ‘McJobs’ when there is a Republican president,” he observed. “With Obama, you have that going on super-sized and, instead of covering the fact that part-time work is replacing full-time work, wages have been going down – not since the crisis, which wasn’t Obama’s fault, but since the recovery started – is his recovery.”

Freddoso said that the press even played an active role in tarring Republican candidates. He cited one episode in which George Stephanopoulos brought up an “imaginary contraception ban that no one was advocating and nobody ever supported” in a Republican presidential primary debate. That moment helped to create the narrative that GOP politicians want to ban contraception, in spite of the fact that no such legislation was ever proposed.

Doocy closed by quoting Freddoso in a recent column he wrote for the New York Post. There, Freddoso quoted UCLA political scientist Tim Groseclose who claimed that, “without media bias, America would vote about like Texas or Kentucky.”