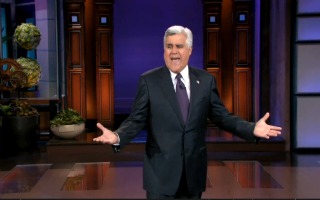 Tonight Show host Jay Leno decided to try his hand at delivering a joke about the recently-wrapped Casey Anthony trial. It’s a particularly challenging undertaking given his writers must be sure to 1) come up with a joke that hasn’t already been made roughly 78,943 times on Twitter and that 2) isn’t in poor taste, given we’re dealing with the tragic death of a young child. So how did Leno fare? Judging from the chorus of crickets that followed his joke, we’re thinking this wasn’t one of his usual side-splittingly, knee-slappingly, grandma-punchingly hilarious oeuvres.

His joke about the case’s jurors went over well enough, as jokes at the expense of Floridians are wont to do. But his follow-up… Eh:

I don’t get this. In a stunning decision, Casey Anthony found not guilty. Not guilty. You know what this means? This means President Obama’s economic team is now only the second most clueless people in America. That’s what it means.

When that failed to receive any sort of response, Leno asked his band whether his mic was on. Giggle!

Since you asked, we have a few theories about why the joke didn’t get a reaction: The “Applause” sign didn’t turn on. (As anyone who has ever sat in the audience for a late night show will tell you, you eventually develop the Pavlovian response to laugh maniacally anytime a light is shone in your face.) Everyone in the audience was still waiting for an actual punchline. The bulk of the audience was too busy Googling “Nancy Grace reaction” or “Charlie Sheen Gathering of the Juggalos” on their PDAs to notice Leno was even talking.

On the bright side: Leno did a Schwarzenegger impression! Haha?