Bill O’Reilly Blows Up In Epic Segment With Alan Colmes, Rages At Him: ‘This Is Just Bull-Blank!’ 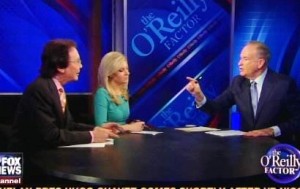 Bill O’Reilly brought on Alan Colmes and Monica Crowley to talk about President Obama‘s seeming reticence to offer any meaningful spending cuts, but most of the segment involved O’Reilly getting into a shouting match with Colmes over Colmes not being able, as O’Reilly viewed it, to provide concrete examples of what Obama wants to cut. O’Reilly repeatedly shouted at Colmes, called him a liar, and declared his claims to be “bull-blank.”

Colmes told O’Reilly that it shouldn’t be a surprise that Obama is trying to get Congress back in the hands of the Democrats in 2014, though he disagreed with O’Reilly’s assessment that the president is willing to harm the country in the name of getting the House back in Nancy Pelosi‘s control. O’Reilly said Obama is deliberately trying to avoid negotiating with Republicans and damaging their brand.

Monica Crowley agreed, pointing out that before the House went to the Republicans in 2010, the Democrats pushed “socialized medicine” through Congress, and argued that Obama is less about getting things done and more about being a “fundamental transformer.” Colmes pushed back that Obama has been open to Medicare and other entitlement cuts, but O’Reilly said that the president hasn’t gotten specific enough.

When Colmes challenged O’Reilly, O’Reilly got visibly angry and shouted at Colmes to name “one damn program he said he’d cut.” Colmes threw out Medicare, to which O’Reilly flipped out, insisted that that’s too broad, and told Colmes “You are lying! You are lying here!” Colmes tried to calm down O’Reilly, but O’Reilly continued to call him a liar. Crowley tried to jump in, but O’Reilly stayed on Colmes and would not let it go.

Colmes continued telling O’Reilly he can’t unfairly accuse Obama of trying to harm the country, but O’Reilly would not let Colmes off easy, shouting at him to explain where Obama will cut Medicare and by how much less. O’Reilly came close to swearing on the air, telling Colmes “this is just bull-blank!”

O’Reilly ended the segment by telling Colmes that he is ignorant of what cuts Obama wants because “the guy you revere” doesn’t care about cuts, adding that “I give a damn about the American people and we’re being conned and you’re buying the con.”