Bill O’Reilly: The Only Person Weeping Over Kim Jong-il’s Death Is His Hairdresser
video

Bill O’Reilly: The Only Person Weeping Over Kim Jong-il’s Death Is His Hairdresser 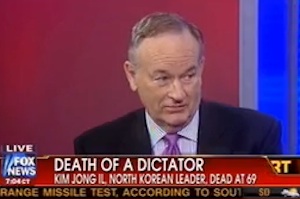 Fox News’s Bill O’Reilly appeared on Fox and Friends Monday morning and opined that the late North Korean leader Kim Jong-il was in Hell and footage of the North Koreans weeping was a fraud. “If there is an after life, I wouldn’t want to be this guy. All right? He’s a little warm right now,” O’Reilly snarked. “Put those weeping ladies up. The seven ladies they’re paying to weep in North Korea.”

“I guarantee you, ladies and gentlemen, they have been paid with hamburgers,” O’Reilly surmised. “There is no food in that country. All right? So they said hey, we need, what is it, eight leaping ladies, in the Christmas song. We need weeping ladies and there they are. Is there one tear? Do you see one tear? I see no tears.”

“The only person sad is this person’s hairdresser,” O’Reilly continued. “Have you seen this guy’s hair? What was that going on there? Look, let’s just be very, very clear that this was a tyrant. This was was a killer, a murderer, enslaved his people, starved his own people. Nobody knows what’s going to happen in that back water now, but they do have nuclear weapons, so you have to watch them. It’s like a crazy guy with a knife on the subway. There is nothing you can really do to him, but you have to contain him. You have to watch every move he makes. That’s what we’re doing.”