Bolton Clashes With Stossel Over Obama’s Drones, Accuses Libertarians Of ‘Defending The Confederacy’

Bolton Clashes With Stossel Over Obama’s Drones, Accuses Libertarians Of ‘Defending The Confederacy’ 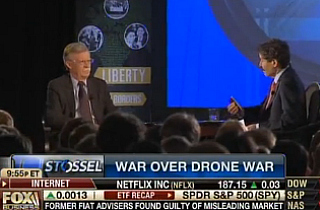 John Stossel‘s annual show from the International Students for Liberty Conference features not only the usual friendly libertarians, but a handful of liberals and conservatives who willfully engage a potentially hostile crowd of 1,000+ libertarian students.

As our readers are likely aware by now, Ann Coulter happened to be one of the two conservatives brought on to debate the students. And it was, shall we say, tense.

The other conservative featured in the program was John Bolton, former Bush official and he of the “neocon” variety. Last year, Bolton’s appearance on Stossel’s show (full disclosure, again: Stossel is my former boss) resulted in a bit of controversy. But despite the not-so-warm reception last year, Bolton returned again to discuss why he believes a neoconservative foreign policy is best; and continue his defense of President Obama‘s “sensible” targeted assassination program.

“It doesn’t seem morally right to just take the word of some government officials that this guy’s a terrorist and send a machine to kill him, and kill civilians along with him,” Stossel said to Bolton.

“The commander-in-chief authority vested by the Constitution in the president gives him the direction over the war capabilities of the United States,” Bolton replied. “And his efforts, both in the Bush and the Obama administration, to go after the terrorists, I think is entirely justified.”

“So America can kill anybody anywhere?” Stossel asked.

“Of course not,” Bolton shot back, “listen to what I just said.” He re-asserted that the Constitution authorizes, “subject to congressional checks,” the power for the executive to take out enemy combatants.

Stossel then asked the $64,000 question about blowback: “Don’t you think that makes us new enemies? When the drone sends something down that kills a group of people, they kill children and cousins. Doesn’t that make new terrorists who will try to kill us?”

“I believe that our military does everything that it can to avoid civilian casualties,” Bolton said. “That is not avoidable sometimes because of the way the terrorists conduct themselves, living among civilians.”

One student from George Mason University (my alma mater) grilled Bolton over the fact that, throughout his use of drone strikes President Obama has been subjected to very little, if any, congressional authority. The audience applauded. Here’s Bolton’s answer:

“The framers of the Constitution had just won our country’s independence by war. They knew what the threat was that we faced as a small country. They knew we needed an energetic capability to defend ourselves. They wanted a strong commander-in-chief. They created a Congress that had power over the purse — the principal check on the president’s war-making power. And that check is there. If Congress doesn’t want to wage war against the Taliban, against al-Qaeda, against whomever, they can cut off funding for it.

So… apparently Bolton believes appropriations process is an actual check on the president assassinating American citizens without due process. Not sure how that works out in the former ambassador’s mind. In case he forgot: the due process itself is supposed to act as a check on executive power.

The Skeptical Libertarian editor Daniel Bier then asked a question that drew massive applause from the students: “The large majority of Americans support giving the president the authority to kill American citizens without charges or trial or due process. My question is, if you were identified as a threat by some nameless official in the administration, would you want due process?”

As the room erupted into some booing at the notion of suspending due process for any reason, Bolton snapped back, “You want to discredit a movement, defend the Confederacy. Go ahead.”

Because the segment had to end for time’s sake, Bier never got the chance to respond. So I’ll give him the space here:

“It’s ludicrous to compare the deliberate assassination of a 16-year-old American citizen, who is not engaged in hostilities against the United States, who has never been charged with a crime, and was in a neutral country, with shooting back at Confederate soldiers on a battlefield. If Ambassador Bolton wanted to make a more apt Civil War comparison, he could have cited Lincoln’s suspension of habeas corpus for citizens in the North, the deportation of an anti-war congressman, or the imprisonment of dissident journalists. It’s a clever rhetorical twist to equate support for due process with support for slavery, but it’s a complete non-sequitur. Mr. Bolton never answered my question, and so it seems he’s quite comfortable with the idea of a single man deciding who lives and dies, without any restraint or judicial review. The president is commander-in-chief of the armed forces, not God.”

(By the way, for those wondering: the liberal guest on the show was former Rep. Dennis Kucinich.)

Watch below, via Fox Business: