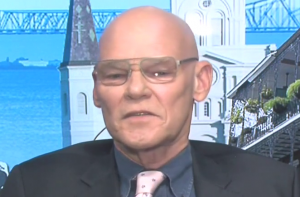 “I had to come out because of all the foolishness going on,” he said. “That gentleman [Washington Post blogger Chris Cillizza] talks about a total Democratic freakout, and then he quotes a guy who talked to a guy.”

Carville said that owner Jeff Bezos “needs to go to The Washington Post and get this place in order. There’s nobody editing this newspaper as far as I can see.”

“If there’s no full-scale Democratic freakout, why is there a rise in support for Bernie Sanders, why do now have her below 50% with Democrats for the first time, and why does she have the lowest approval rating since 2001?” asked guest host Luke Russert.

He proceeded to put on a squeaky voice and make fun of Clinton’s critics. “’We don’t like Hillary, why are Paul Begala and Jim Carville out there defending her? Why can’t we attack her like I want to?’ I understand this, I’ve been dealing this for 23 years now.”

“So one of the highest paid political operatives in the world, you have no problem seeing ‘FBI,’ ‘Clinton’ and ‘criminal investigation’ next to each other in headlines around the country?” Russert pressed.