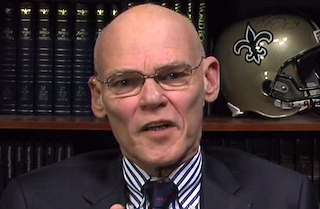 Democratic strategist James Carville and Weekly Standard editor Bill Kristol came to an awkward semi-agreement on Morning Joe Monday morning, when both voiced different sides of the same argument that Obama’s poll numbers had more to do with the performance of his policies than any grand, historical trend about second terms.

“You guys are overthinking this,” Kristol told the panel that had just decided all second terms are doomed. “Obamacare is a total disaster. if Obamacare were working well, and if we were respected around the world, and people had the sense that Iranians were in retreat and our allies had confidence in us, don’t you think Obama’s numbers would be ten points higher?”

“The health care thing,” Carville said, after a list of Obama’s accomplishments, including plunging deficits and a salvaged auto industry. “On November 30th, suppose it’s working well—that story will fade somewhat in the background. I think we can stop putting the nails in the coffin here. We can admit that there’s some real, deep, fundamental problems with this president. But I think we’re throwing the dirt here too soon.”

“I agree with James in the sense it all depends on policies,” Kristol replied. “If Obamacare works, if it turns out, hey, they love that new health insurance they’re paying more for, and the system works wonderfully, the central planning for 320 million people really works much better than one might think it might. Then he’ll be in better shape. And, indeed, if Iran starts dismantling its nuclear weapons, and we’re stronger around the world, and people stop dying in Syria and so forth, then Obama’s numbers will go up. I agree. It’s about substance.”