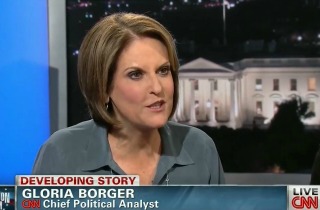 New Jersey’s Republican Gov. Chris Christie is set to win a historic reelection victory on Tuesday to the tune of around 60 percent of the Garden State’s gubernatorial vote in spite of the fact that the New Jersey has nearly 700,000 more registered Democrats than Republicans. Unfortunately for the likely 2016 presidential prospect, CNN Chief Political Analyst Gloria Borger has declared Christie the loser of the crucial early GOP primary contests. But while Christie has lost the decisive Gloria Borger poll of the 2016 presidential landscape, he continues to win in actual polls.

“He’s a moderate Republican,” CNN anchor Wolf Blitzer noted. “If he were to get the Republican nomination, he would have a decent chance. But, could he win the Iowa Caucus? Could he win South Carolina?”

“No,” Borger declared with a laugh.

While there is little in the way of data to back up Borger’s assertion, there is some that she apparently missed. According to a survey of South Carolina GOP primary voters conducted by the respected Republican pollster, Harper Polling, for Conservative Intelligence Briefing, Christie is actually a presumed favorite.

According to a WMUR/University of New Hampshire poll taken from October 7 to 16, the Granite State is also fertile ground for the New Jersey governor to ill. There, he is statistically tied with Paul at 16 and 17 percent support respectively.

And these results are being discovered at the time in Christie’s political persona when he has not yet tracked right or moderated any of his political views in order to appeal to an electorate outside the Garden State. He can only shift right as the GOP debates begin and the conservative presidential primaries accelerate.

Of course, CNN’s chief political analyst may have a point with Iowa. The Hawkeye State is famous for its conservative GOP electorate and Christie may have troubles appealing to enthusiastic social conservatives there. While no polling exists of Iowa’s potential GOP caucus-goers, the last candidate to best his opponents in the caucuses and go on to win the nomination was George W. Bush in 2000. But, surely, Borger knew that much.