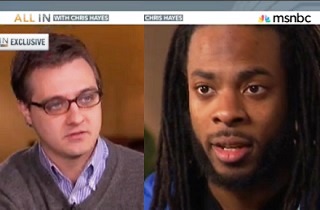 On Monday night’s All In with Chris Hayes, host Chris Hayes broadcast his exclusive interview with star Seattle Seahawks cornerback and recent controversy magnet Richard Sherman, and while the two covered a lot of ground in the extensive taped chat, there was one particularly interesting wrinkle in the “thug” controversy that Hayes explored. While Sherman bristled at being called a thug, Hayes wondered how he felt about the flipside to that, and whether invocations of his extensive education were presenting him as “one of the good ones.”

The idea is that by defending Sherman on the grounds of respectability politics, these folks are validating the very stereotype that Sherman has decried.

“One side of it is people calling you a thug,” Hayes began, “and then people run in and say, ‘But, oh, he’s got a Stanford degree,’ and it feels like sometimes the subtext is ‘He’s one of the good ones. Don’t worry. He has a Stanford degree. How do you respond to the way that degree, and the fact that you were a good student, is being marshalled in the way people talk about it?”

“Well, I think that’s showing some of the closed-mindedness of society, and how they want to label people,” Sherman replied. “They want to feel like it’s black or white, it’s either this category or this category. There’s no middle ground.”

He added “I was totally raised in Compton. I totally was there. I might not fit in the best, but I was there, that’s where I’m from. I also went to Stanford and got mu education, succeeded in that way, and I’m also in the NFL, and part of that fraternity.”

“There’s so many things that go into a person that — stop trying to label people, is what I can say,” Sherman continued. “The best label for me is that I’m a pragmatist. I’m a guy who believes that my reality is the reality of the world, and I do my best to make it that way.”

“Barack Obama calls himself a pragmatist, someone who has lived in a lot of different worlds as well,” Hayes observed.

(You can watch the full interview here):