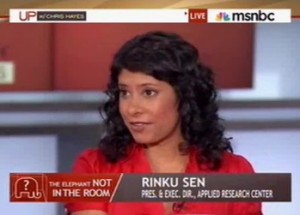 On Sunday morning’s Up with Chris Hayes, talk turned to discontent with the GOP field, exemplified by the Tabasco-hot speculation about a Chris Christie run for president. Hayes hilariously evoked liberal PTSD over the 2004 nomination of Sen. John Kerry, while Colorlines.com publisher Rinku Sen weighed in that Christie might be seen, by the Republican establishment, as a candidate who can attract voters of color because he’s “less obviously racist than the rest of the Republican presidential field.”

Hayes begins the segment with a hilarious, canny observation, comparing this year’s Republican field with a 2004 Democratic slate that produced a nominee so wooden, you could almost see the Lincoln Logs that made up his skeleton.

“Nobody was that happy with the field on the Democratic side, and you were having a moments like, our savior will be Wesley Clark,” Hayes began. “Everybody in the end ended up really working hard emotionally to psych themselves up for John Kerry,” he continued, then, making the sort of face you used to see on Fear Factor right before a contestant would eat yak testicles, said “and it was like, okay, John Kerry, we will do this John Kerry. You are seeing that. Don’t you feel it’s like a haunting similarity there?”

Haunting is right. There are likely very few liberals who didn’t hear an audible, collective head-desk when Kerry’s nomination became a fait accompli. If liberals can take solace in anything these days, it’s the prospect that conservatives might soon be feeling a similar discomfort.

One unexamined subtext of Hayes’ observation is the difficulty of slaying the incumbent dragon in modern politics. George H.W. Bush rode the wave of Ronald Reagan‘s incumbency into the White House, and was unseated with a large dollop of help from Ross Perot. George W. Bush barely squeaked by Al Gore, with help form the Supreme Court, but also, many would argue, because Gore unwisely distanced himself from Bill Clinton. More and more, I believe the optics of incumbency, the act of looking presidential, plays a large part in modern elections.

Barack Obama understood this in 2008 when he spoke from a White House-evocative stage at the Democratic convention in Denver, or when he employed that much-derided faux-presidential seal. Most observers point to his handling of the economic collapse (going to Washington to lend a hand, while rival John McCain suspended his campaign) as the presidential-looking turning point that sealed the deal for him in the waning days of the 2008 campaign.

But Colorlines.com publisher Rinku Sen gets the award for best sound-byte, when, in an attempt to explain Christie’s appeal to the Republican establishment, said that his pushback against the hysteria surrounding the so-called “Ground Zero Mosque” and his appointment of Muslim-American judge Sohail Mohammed made him “less obviously racist than the rest of the (Republican presidential) field.”

While the construction of Sen’s point may have been overly broad (there’s a difference between being “racist,” and simply being willing to alienate certain blocs of voters), she identifies a very real problem with this year’s GOP field. When you have Rick Perry tanking, not for being “unelectable,” but for daring to ask the conservative base to have a heart where the children of undocumented immigrants are concerned, and when you look back at some of the intense race-baiting that occurred around immigration during the mid-terms, it’s an issue that conservatives should pay attention to, rather than charging at the “racist” red cape.

Former Obama Spokesman and current Senior Strategist for Priorities USA Action Bill Burton picked up on something that I also noticed at the CNN/Tea Party debate that further supports the notion that some conservatives don’t make a distinction between Hispanic voters and “illegals.” From a Sept. 24 memo to reporters:(emphasis mine)

During the last debates, Mitt Romney, Michele Bachmann, and others have taken turns bashing a Texas law — a version of the DREAM Act — that provides a chance at college for children of undocumented immigrants who were brought here by their parents. Rick Santorum even claimed the Texas law was “an attempt to attract illegal vote — I mean Latino — voters.” It’s a law that had the support of Democrats and Republicans because it was designed to provide a pathway to productivity for young people through education. As Republican consultant Mike Murphy noted during the tuition exchange, “Perry taking water on immigration. But careful GOP. Wanna win NV, CO, NM, FL? I hope so.”

There are many conservatives with reasonable positions on immigration (even Rick Perry had a few), but a significant enough portion of the base responds to this kind of hostility to make it worth a candidate’s while to tune their messages to it, at least during primaries. But with Hispanic voters making up an ever-larger percentage of the electorate, and considering the distaste most Americans (many or most conservatives included) have for this kind of thing, Rinku Sen’s point should not be dismissed.

In just a few short weeks, Up with Chris Hayes has established a loose, muffin-fueled vibe that has set it apart from other weekend political offerings, and has also made it a reliable source for good sound bytes. Rather than relying on amped-up, Crossfire-style theatrics for fireworks, Up extracts its notable quotables with a relaxed, comfortable atmosphere. It’s the difference between “Anything goes!” and, “Why shouldn’t anything go, right?”