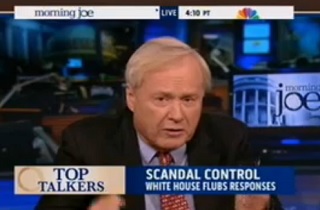 The heady rush of potential scandal formed the steamy head of Wednesday morning’s Morning Joe latté, and even the normally-supportive Chris Matthews got in on the act. As President Obama deals with controversies about the IRS and the Associated Press, which broke on Friday and Monday, respectively, the Joe Scarborough crew blasted the President for his “passivity,” and although Matthews made an effort to lay the blame at the Chief of Staff’s office, he agreed that the administration has lost control, and that voters are thinking “The steering wheel doesn’t control the car any more.”

The myth of a pro-Obama press has gone up in smoke this week, as journalists from every quarter have jumped all over President Obama over a pair of fresh controversies, unanimously operating on a presumption of guilt by the administration on the IRS and Associated Press controversies. Phase two of the political media swarm is to crow that the President isn’t dealing with these scandals because he hasn’t fired anyone three days into them, and just hours after the IRS Inspector General’s report came out.

On MSNBC’s Morning Joe Wednesday morning, host Joe Scarborough and his regulars trotted out that criticism, and more, but it was Matthews’ criticism that was at least a little bit surprising. The Hardball host began by deflecting the blame onto the President’s Chief of Staff, and other advisors. “In second terms, you get into trouble, and you start promoting deputies to principal positions, and we know how it works,” he began. “You need people around you, a strong government led by a strong chief of staff who can crack the whip.”

“And this is why it’s important to voters,” Matthews continued. “When you go in the voting booth, you only get one vote. You pick Romney or Obama. When you pick Obama, you want to know the steering wheel that you just turned to the left a little bit, you want that to matter. That means you want that president you voted for to run things. That’s the only power you have as a citizen. Pick the person you want to run things, and then they run them.”

He added, “For anybody to run around in Washington and say ‘We don’t run the IRS,’ or ‘We can’t control the Justice Department, and I’m recusing myself,’ they say ‘The steering wheel doesn’t control the car any more.’ The person says ‘I want the person I voted for to be in charge. The only power I have, and you’re telling me I don’t have it? Because you don’t have it. And that is going to really bug people, especially people that care about government doing a good job.”

Chris Matthews has long expressed his admiration for the President, so his willingness to go along with the premature tide against Obama should be of concern to supporters. Slagging the President has become the go-to way to make your bones in the mainstream press, but Matthews has little to gain from joining the chorus. Time will tell who ends up looking foolish, but early indications are that the substance won’t live up to the hype in these scandals.

There are legitimate criticisms to be made of the President; it is genuinely discomfiting that he apparently found out about these issues when we did. But much of the weight of the media dogpile consists of assumptions and speculation, and even borderline slander, that are way ahead of the facts in these cases. The President doesn’t “run” the IRS; that’s the whole reason this is a scandal, because the IRS is supposed to be a politically neutral agency. What matters now, since the Inspector General’s report has finally come out three business days after the story broke, is how the President deals with it. The Associated Press leak investigation is also still unfolding, but if Attorney General Eric Holder‘s comments are any indication, the administration’s position will be that they acted appropriately to protect national security. Time will tell if that explanation holds up, but there have been precious little time and information to judge it.