CNN Host to NASA: Seriously, Is The World Ending In 2012?
video

CNN Host to NASA: Seriously, Is The World Ending In 2012? 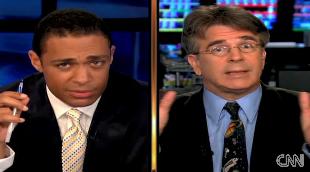 CNN is not about opinions, they’re about news. So listen, NASA, there’s this movie out about the world coming to an end in 2012, and we know you’ve been out trying to debunk this possibility.

But we need facts, and T.J. Holmes guest anchoring American Morning is going to be our fact-finding vessel.

“I thought you all were busy trying to build a new rocket to send people into space, and trying to discover life on the moon and Mars, but you’re putting together a PR campaign against this movie essentially, not against the enter portion but against some of the themes,” said Holmes to begin the segment. (And really, is that actually what NASA is busy doing? Finding martians?)

Jim Garvin, Chief Scientist at NASA, was ready to respond. “We want people to also pay attention to the science behind the facts,” he said.

Holmes: No truth to it at all? There’s no chance that in December of 2012 the world is going to have an issue?
Garvin: Absolutely not…There is no indication, not one iota, that any of the things depicted in the film are going to happen in late 2012. now we’ll be busy then watching the things but nothing you need to worry about.
Holmes: Would you even tell us if there was something to worry about?
Garvin: Absolutely.

NASA hasn’t exactly been waging a full-on “PR campaign” against the movie “2012,” but they have launched a website that answers questions about the apocalyptic myth. The site assures that “nothing bad will happen to the Earth in 2012.”

But now there’s water on the moon so who knows, right?

One last quote from Garvin: “Hollywood’s fun! But so is science.” Truth.