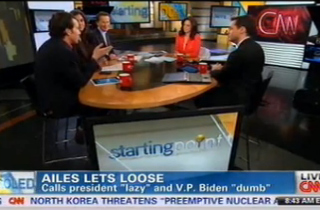 O’Brien introduced the brief segment by reading off quotes from Zev Chafets‘ new Ailes biography, in which the Fox chief calls VP Joe Biden “dumb as an ashtray,” Newt Gingrich “a prick,” and President Obama “lazy.”

The quote about Obama, as O’Brien read it on the air:

“Obama’s the one who never worked a day in his life. He never earned a penny that wasn’t public money. How many fund-raisers does he attend every week? How often does he play basketball and golf? I wish I had that kind of time. He’s lazy, but the media won’t report that.”

What she did not read, however, was the next part of the excerpt, in which Chafets wrote:

“He noticed my arched eyebrows and added, “I didn’t come up with that. Obama said that, to Barbara Walters.” (What Obama said was that he feels a laziness in himself that he attributes to his laid-back upbringing in Hawaii.)”

After O’Brien called the “lazy” comment “not nice,” conservative commentator Will Cain and CNN reporter John Berman jumped in to provide context for Ailes’ comment.

“Everyone’s latching on to the fact that he called the president lazy,” Cain said. “Roger Ailes did go on to say that ‘I’m only quoting from the president directly.’ He talked about an interview that President Obama gave to Barbara Walters where he said, ‘I grew up in Hawaii, which is pretty laid back’. Roger Ailes wasn’t coming up with that on his own. And he made a point of making that.”

“Okay, so the ‘pretty laid back’ to ‘lazy’ is a little bit of a leap to me,” O’Brien pushed back.

“He did. Barack Obama said he feels a laziness in himself that he attributes to his laid back upbringing in Hawaii,” Cain continued.