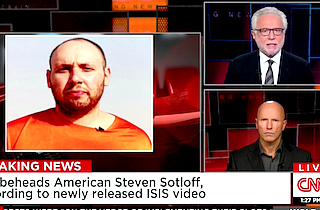 Let it never be said CNN is behind the facts.

In fact they’re often ahead of them, as was Wolf Blitzer Tuesday afternoon when he quickly tried to ascertain from his correspondent if the killer in the videotaped execution of freelance American journalist Steven Sotloff was the same as the one in the videotaped execution of James Foley — a tough task, as Foley’s killer has yet to be identified.

That didn’t stop Blitzer. “Can we make an initial determination?” he asked, about a video so new that White House Press Secretary Josh Earnest was finding out about it at roughly that moment.

CNN foreign correspondent Karl Penhaus’ answer was a long version of “no,” but he tried to give Blitzer a hit or two of that good old CNN-brand speculation, nothing that the men in the two videos were dressed similarly, appeared to be left handed, seemed to be of roughly the same build, and had, from “first blush,” similar London accents.

Could they be the same person? It’s possible! Even facial reconstruction software hasn’t helped authorities identify Foley’s killer, so it’s hard to pinpoint what being “the same” as an unidentified person might mean in this case. Penhaus also acknowledged that the man’s language (“Obama, I’m back”) appeared to have been chosen to give the videos continuity, which he said was “an indication that he certainly wants us to think he’s the very same man that appeared on that brutal James Foley execution video.” So he’s either the same guy or someone ISIS wants us to think is the same guy, maybe. Or something else.

If CNN were looking for alternative programming, they could have switched over to the White House press briefing, and a few minutes later the State Department briefing. As for the future, when discussing just-released videos that haven’t even been confirmed yet, the correct answer to “Can we make an initial determination?” ought to be “Not yet, Wolf.”