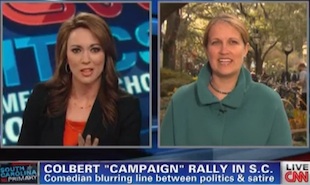 During a segment on CNN’s Newsroom, anchor Brooke Baldwin was sincerely shocked by the notion that college students were getting their news from Stephen Colbert and Comedy Central.

RELATED: NBC’s Chuck Todd Blasts Stephen Colbert: ‘He Is Making A Mockery Of The System’

Baldwin was talking with College of Charleston professor Amanda Ruth-McSwain about Colbert’s recent rally with Herman Cain in South Carolina and asked why the college allowed the late-night comedian on campus. “I think that ultimately the decision to actually host Stephen here was that our students — at the end of the day –this is where they turn for the news. So many of them are in the discussion through listening to things like the Jon Stewart show, and Stephen Colbert, and you know, it is still part of the political process for them. It is educational and that is where they are getting most of the information and making most of their decisions.”

“Hang on, hang on! I have to stop you. Look — you said this is where students are getting their news?!” Baldwin asked incredulously. “On Comedy Central?! As an associate professor, does that worry you at all?”

“Um, you know, clearly, it is not something I necessarily would encourage, but at the same time I hope that people are getting their news somewhere, you know. So, although it’s, it is satire at the end of the day, it is at least exposing them to political process and opening up the discussion and getting them involved. So although it might not be ideal, it’s what the facts are.”

Watch via CNN below: