Coburn Slams Erick Erickson’s Claim He ‘Surrendered’ On Obamacare: ‘You Start Pushing Me,’ I ‘Push Back Harder’
VIDEO

Coburn Slams Erick Erickson’s Claim He ‘Surrendered’ On Obamacare: ‘You Start Pushing Me,’ I ‘Push Back Harder’ 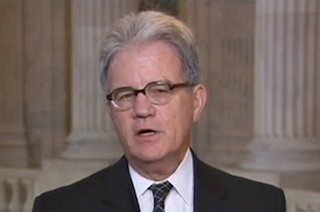 Oklahoma Senator Tom Coburn appeared on Morning Joe Thursday morning to respond to stinging criticism from Red State’s Erick Erickson and other conservatives over his refusal to go along with Senate Republicans who want to threaten to shut down the government over Obamacare funding.

Erickson had supported Coburn in his far-right 2004 bid for Oklahoma Senate, but in an editorial published last night entitled “From Pig to Man, and From Man to Pig” he excoriated a “softened” Coburn for “surrendering in advance” on Obamacare rather than joining with Ted Cruz, Mike Lee, Marco Rubio and other GOP Senators in more rigid opposition to funding the program.

“You can’t respond to the bloggers,” Coburn replied on MSNBC. “I mean, one period in six months, I’m a hero and the next time I’m not. The fact is, unless you agree with them 100% of the time, you don’t pass muster. So that’s a blogger on Red State that I obviously can’t please.”

Though he reiterated his staunch opposition to Obamacare, Coburn had equally harsh words for what he characterized as a small faction in the Senate who were sabotaging their colleagues by using external pressure rather than internal negotiating.

“If you have a strategy, what you ought to do is build internally support for that strategy and come to an agreement so that you have all the power of the Republicans working it, rather than have a small group of Republicans who then generate through outside groups pressure on other Republicans,” Coburn said. “My attitude—and Joe [Scarborough] knows this, Mike Barnicle knows this—you start pushing me, all you do is get me to push back harder.”

Watch the interview below, via MSNBC: