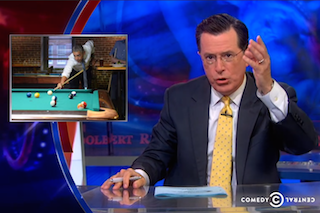 Over the past few weeks, pundits on Fox News have been hammering President Barack Obama for doing things like playing pool in Colorado and planning a vacation in “ritzy” Martha’s Vineyard instead traveling to the border for a more substantial photo op with immigrant children. On Tuesday night, Stephen Colbert diagnoses the president’s problem: “senioritis.”

But even worse than Obama’s trips around this country was his recent jaunt to Rome, where, according to Fox & Friends’ Peter Johnson, Jr. he attended a dinner party and “discussed art, architecture — the Enlightenment!”

“The Enlightenment!” Colbert exclaimed in disgust. “The 17th and 18th Century movement that believed that knowledge was worth acquiring and that the scientific method is superior to superstition and witchcraft!”

Labeling Obama’s infliction “senioritis,” Colbert said, “He’s in the last two semesters of his presidency and he’s totally checked out: tossing back beers, late night bull sessions with his friends, traveling across Europe.”

After relaying what may or may not have been his own backpacking experiences, Colbert warned Obama that “finding yourself abroad” isn’t always what it’s cracked up to be. “So Mr. President, turn in the Eurail pass, come home, buckle down and hit the books because — let’s face it — you’ve only got two years before graduation and you’re looking at an F in Econ.”