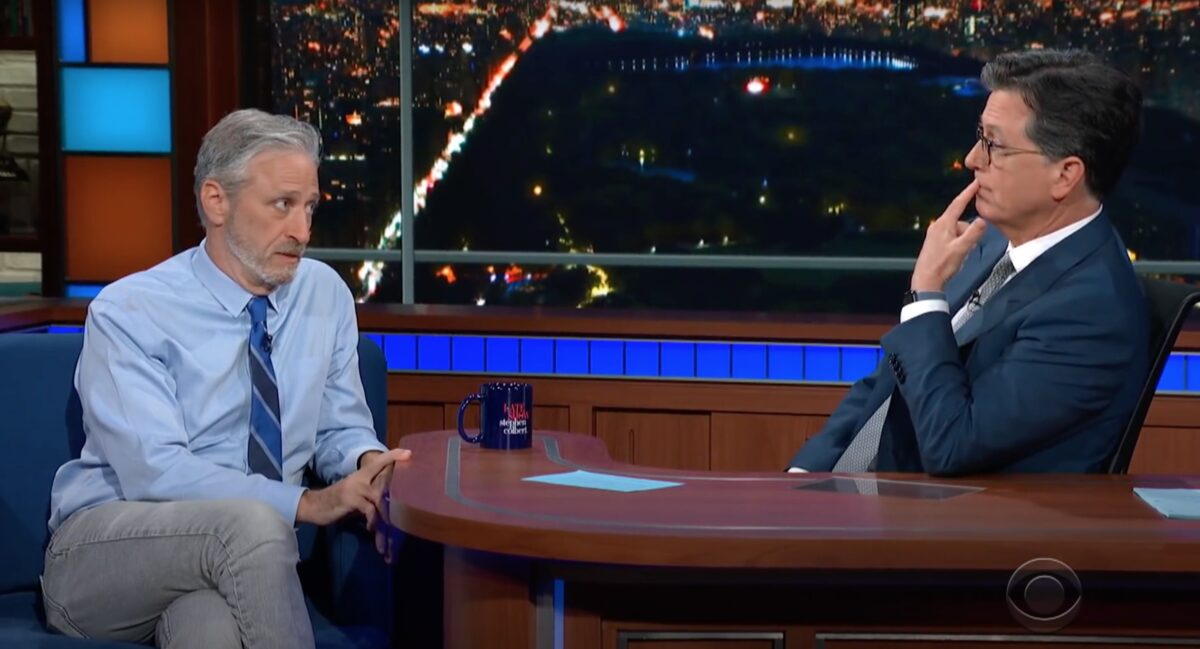 The former Daily Show host was Stephen Colbert’s guest on Monday night for the show’s first full-audience production at the Ed Sullivan Theater since the pandemic began. Stewart and Colbert butted heads after Stewart voiced support for the theory that Covid came from a Chinese laboratory.

“And how long have you worked for Senator Ron Johnson?” Colbert asked during the exchange. This was clearly a jab at the Wisconsin senator — a longtime believer in the lab leak theory. But Stewart stood by his argument that “this is not a conspiracy.”

Between the coronavirus’ origins from Wuhan, China’s lack of transparency, and the politicization of the pandemic, the public discourse over the lab leak theory has been colored by battles of partisanship. Conservatives and hard-liners against China have been arguing in favor of the theory for months, whereas others have viewed it as an anti-Chinese conspiracy theory, or at least, an idea that requires more investigation, facts and hard evidence before it can be proven true.

Since Stewart’s endorsement of the lab leak theory flies in the face of those inclined to dismiss it as a right-wing talking point, many conservatives got on Twitter to gloat over the comedian’s surprising vote of confidence. Right-leaning political observers also mocked Colbert’s quip about Johnson, while complaining about how social media and the press have handled the theory by treating it as not credible:

Old enough to remember when blaming Wuhan, China for the Coronavirus made you a racist. Now it is a joke on late night “comedy” shows. We’ve sure come a long way in one election cycle. pic.twitter.com/6uk13PTfNv

Colbert’s Ron Johnson quip is such a perfect encapsulation of how lazy and boring he is now.

“Wait but you’re not on Blue Team? I am short-circuiting. Russia.”https://t.co/Wfj4EKsS4k

This is hysterical from Jon Stewart. But until a month ago Facebook would have blocked this from being distributed: pic.twitter.com/DnVcwMbytt

Stephen Colbert stunned & resorting to lines about Ron Johnson is what happens when a complete orthodoxy goes unchallenged for years.

Online leftists seem Big Mad at Jon Stewart for treating the lab leak theory as verrrry plausible (of course it is) on Colbert tonight. They’re deeply committed to the “conspiracy theory” line & notion that thinking/speaking critically about CCP puts Asian Americans in danger.

One of the reasons Jon Stewart was so talented is that he spoke truth to power no matter who was in office and was beholden to no party.

This is how political comedy is done right. No one else on tv does this anymore. No one. https://t.co/Il3h38nQFx

Jon Stewart states the obvious, and Colbert doesn’t know what to do with it…because TRUMP!!!!

You can see how visibly uncomfortable Colbert is getting as he watches his buddy Jon Stewart make an impassioned argument for the lab leak theory. https://t.co/wJwMF0Zhwk

Colbert’s joke about Ron Johnson is very telling. His audience cant handle what Jon Stewart is saying without a partisan lens