Coulter Is Right: Rand Paul Ought to Be Like Dad, Pick a Position and Defend It 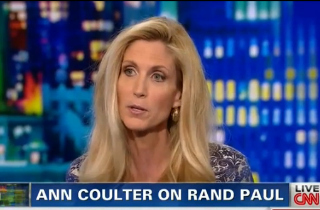 Amidst ongoing questions about Sen. Rand Paul‘s (R-KY) reverse course on ending foreign aid to Israel, Ann Coulter has one message for the libertarian-leaning senator: Be like your father — pick a position and stick to it.

During an interview with CNN’s Alisyn Camerota on Tuesday evening, Coulter was asked to comment on whether the senator has changed his position from 2011 — when he openly declared that all foreign aid, including the $3 billion sent annually to Israel, should be ended. In an interview this week, Paul claimed he never proposed eliminating aid to Israel.

“It used to be whatever would please 15-year-old Ayn Rand readers was his position,” Coulter snarked. “Now it is whatever will please basically the mainstream media as his new position.”

She continued: “I wish we would pick a position and go with it — especially if the media hates it, if it’s against what most people think. I would have a lot more respect for someone who takes an unpopular position, defends it, and sticks to it.”

“That’s what his father used to do,” she added, referring to former Rep. Ron Paul (R-TX) who became an iconoclast by sticking to his beliefs even when it contradicted the Republican Party’s narrative on foreign or fiscal policy.

Coulter is right. Rand Paul should stick to his beliefs, especially on this issue.

The senator is not anti-Semitic or anti-Israel for believing that the U.S. should end foreign aid to the most powerful country in the Middle East; especially when you consider the fact that, when he made those comments, he talked about ending all foreign aid, including the $6+ billion our government sends to the countries that surround Israel. This isn’t about targeting Israel, it’s about fiscal responsibility, and avoiding the (often contradictory) entanglements of which Thomas Jefferson warned.

Hawks would suggest Paul’s original views were misguided because foreign aid — especially to Israel — is necessary to help the Jewish state maintain its military supremacy over the many forces that would like to defeat it. But that’s a red herring. Israel has long proven the ability to take care of itself, especially now with an economy larger than Saudi Arabia and roughly the same as Great Britain and Japan. Israel is also the only Middle Eastern country with a nuclear arsenal.

Of course, Paul is in a bind because this is a position that would give his potential opponents an easy way to hand him the dreaded scarlet letter: “anti-Israel.”

And so he finds himself looking like a flip-flopper. When foreign policy comes up during the 2016 GOP primary debates, other candidates will undoubtedly pounce on him for having once held so-called “anti-Israel” views. Crowds will cheer; real American will emerge in the race.

On the other hand, if he’d stuck to his anti-foreign aid missive, he’d definitely find himself in an awkward Rudy-Giuliani-versus-Ron-Paul-like situation that forever paints him as loving terrorists and hating freedom.