Coulter On Lawrence O’Donnell And Maher: They ‘Date Black Gals So They Think They’re Freedom Riders’ 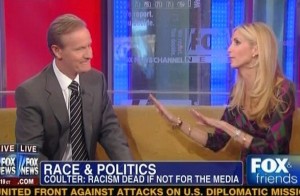 On Tuesday, Fox & Friends host Steve Doocy interviewed author and columnist Ann Coulter about her new book, Mugged, which takes a look at the racial politics of the left.

He kicked things off by playing a clip of MSNBC’s Chris Matthews defending his previous comments about the GOP essentially “stoking racism” for political gain to HBO’s Bill Maher last Friday.

Coulter said that the Democratic party has tried to take credit for things like, say, signing the Civil Rights Act, although “it was actually Eisenhower who got the ball rolling.” She alter added that she found it curious that Matthews “cites all the black people coming up to him and cites black people in other countries whom he refers to as ‘African Americans.'” This is because, she ventured, “here in America, he doesn’t have any black friends. He doesn’t have any black neighbors,” and a picture of his son’s wedding reveals “not a black face in the group.” If he’d been Republican, she added, he “would be convicted of racism in two seconds.”

Coulter also described why it is that she believes Democrats “use” racism for political advantage. Step one, she said, is “tell black people that Republicans hate them for 100 years. Actually only since, I guess, the Democrats finally started to come on around the mid ’60s. Once the civil rights battles were won, you have liberals playacting against nonexistent racism and telling the world that Republicans and Tea Partiers are racist.” Step two, she continued, is to “taunt Republicans for not having more blacks in their party.”

She said that, through writing the book, she was surprised to find all the time that the President directly engages in “race baiting.” Coulter also accuses the left of being quick to label their opponents racist for such things as opposing ObamaCare, being a Tea Party member, or — and here she cited a conversation with Alan Colmes — for saying “the blacks” rather than “blacks” or “black people.”

She also joked that some liberals, Lawrence O’Donnell and Bill Maher among them, think of themselves as “freedom riders” because they date “black gals.”