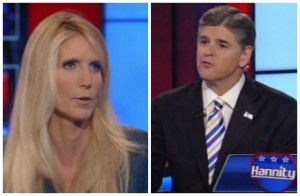 Ann Coulter sat down with Sean Hannity tonight to react to the Senate finally taking action on guns by tearing into the Democrats for manipulating the gun control issue and using Newtown parents as political props. Coulter said that Republicans need to push back against Democrats and say that their “proposals are going to lead to more dead kids.”

Hannity brought up how a few Republican senators wanted to be able to read the exact language of the bill before voting on it. Coulter found it odd that a bill “everyone’s talking about” wouldn’t be made available to the public in full. Hannity argued that not a single proposal following mass shootings in the past few months would do anything to prevent future shootings, suggesting that retired military individuals ought to be place at every school.

Coulter called for more extensive concealed carry and emphasized the need to focus on mental health issues. She accused Democrats of abandoning any action on the latter in order to score political points with policy that, according to Coulter, would “hurt the defense of the innocent.” Hannity slammed the Democrats for “naked exploitation of dead children and grieving families.”

Coulter took offense at background checks specifically because they unfairly target women who have to wait longer periods of times to get guns to protect themselves. Hannity questioned why, if gun control was such a big priority for Obama, he didn’t do anything about it in his entire first term. Coulter pointed to the poll finding that over 90 percent of Americans support background checks, calling it a “fake poll” and accusing the pollsters of lying to people.

Hannity brought up Coulter’s most recent column, in which she mocked MSNBC’s Martin Bashir for suggesting that Republicans would only come around on gun control if their children were killed, and, as an aside, joked that they ought to start with Meghan McCain. Coulter explained it was intentional hyperbole, and said how she thinks conservatives can take back the gun debate from liberals.

“Our position is ‘your proposals are going to lead to more dead kids, our proposals will stop dead kids.’ And I’m really fed up with this idea that, ‘oh, if we only listened to the families.'”

Coulter concluded that the Democrats always try to “find the victims who agree with [them], and send out weeping women to argue with the Republicans.”