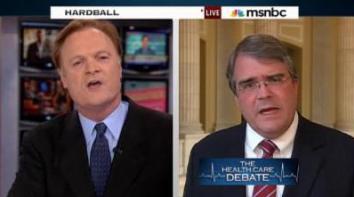 Sometimes an interview goes off the rails, and it’s very obvious where things started going poorly. But Lawrence O’Donnell‘s interview-like segment (it would be giving it too much credit to actually call it an “interview”) with GOP Rep. John Culberson of Texas yesterday was awful and shouty from start to finish. It left an agitated Culberson bashing MSNBC as a network after being interrupted for the umpteenth time.

As Joe Scarborough described it on Twitter, “Lawrence O’Donnell (aka Crazy Larry) erupts on congressman.” Let’s take a look at what happened.

Scarborough later joked, “Going on the Today Show at 7a to talk Health Care Reform. Praying to Jesus that Lawrence isn’t the one conducting the interview!”

It started by O’Donnell, filling in for Chris Matthews on Hardball, running the “Is Medicare socialism?” line of questioning into the ground, over and over again. “Lawrence, you’re illustrating why MSNBC’s viewership is in the tank, because you don’t allow the people you’re interviewing to answer questions,” said Culberson.

Then it was time for the hypothetical portion of the “interview.” O’Donnell forced Culberson to say how he would have voted in 1935 on social security, and in 1965 on Medicare. It wasn’t enough for Culberson to give his take on each of the programs – O’Donnell wanted a literal ‘yay or nay.’

“Do you wonder why nobody listens to MSNBC?” asked Culberson. “They don’t want to hear your endless spinning,” said O’Donnell, who apparently thought people wanted to hear his endless interrupting.

It was an embarrassing interview, exacerbated by the fact that Culberson was being especially reasonable throughout. O’Donnell is known for his occasional outbursts, particularly another lie-related one on MSNBC in 2004. Just like the town hall protesters who yell and scream don’t quiet down enough to get to the actual issues, the same goes for interviews that devolve into a shouting match and irrelevant tangents. Disagreement is great – and particularly great for cable news – but there needs to be a certain civility to the discussion.