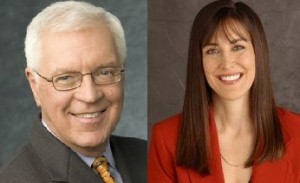 Al Gore‘s Current TV is taking the next step toward fulfilling its promise of a 24-hour slate of progressive news and commentary with the announcement that the network will debut a morning programming block featuring progressive radio veterans Bill Press and Stephanie Miller. Beginning in early spring, Press will anchor the 6am-9am time slot, with Miller holding down the 9am-12pm hours.

Current will simulcast both hosts’ radio programs, with Press’ Current broadcast to be dubbed Full Court Press, while Miller’s show will be called Talking Liberally: The Stephanie Miller Show. Broadcasting from Los Angeles, Stephanie Miller is a well-known figure among liberals and progressives, thanks to a long broadcasting career that currently finds her on XM’s America Left.

Bill Press is one of the more obvious choices to help launch Current’s foray into dayside programming. One of the few progressive radio hosts to have found widespread success, he’s also a fixture in Washington, DC, a crucial feature if Current is to challenge the dominant (in terms of relevance) Morning Joe. He’s also the rare breed of firebreather who also knows how to play well with the other side.

Interestingly, both Press and Miller have a 6 Degrees of Pat Buchanan connection. Bill Press was co-host of Buchanan and Press with Pat Buchanan on MSNBC in the early aughts, and Stephanie Miller co-hosted CNBC’s Equal Time with Buchanan’s sister, Bay Buchanan, in the nineties.

New York, NY – March 5, 2012 – Current TV today announced the launch of a new morning news block featuring live simulcasts of the radio programs “The Bill Press Show” from 6am-9am ET and “The Stephanie Miller Show” from 9am-12pm ET every weekday starting early this spring. These additions further strengthen Current’s line-up of political commentary and analysis programs which include “Countdown with Keith Olbermann,” “The Young Turks with Cenk Uygur,” and “The War Room with Jennifer Granholm”.

“I’ve followed Stephanie and Bill for years. They provide the kind of smart, insightful news analysis that our viewers want to hear,” commented Current TV Chairman, Al Gore. “Bill brings a vital perspective directly from the heart of the Beltway, and Stephanie’s fresh take on politics and news has a decidedly outsider flair. We’re really looking forward to bringing their voices to our viewers.”

“2012 is a crucial year in the history of our country and we felt that morning cable television programming was simply not speaking to Americans with progressive viewpoints and ideas,” said David Bohrman, President, Current TV. “This new block will be an alternative to the tired banter and light news that isfound on the air today. We are proud to be the only cable news network presenting independent, intelligent and engaging progressive programming for viewers every morning.”

Every weekday Current TV’s camera will be live inside Bill and Stephanie’s studios to bring viewers live coverage of two of the most progressive radio shows on the air today. Current viewers will now have access to daily live interviews, political commentary, listener calls, as well as Bill and Stephanie’s take on the news of the day.

“The addition of Bill and Stephanie to the Current TV news line up delivers on the promise of creating a 24 hour progressive cable news network that speaks truth to power and offers a truealternative to traditional programming,“ Bohrman continued.

“Current has the young, progressive and involved audience that I want to reach everyday,” said Stephanie Miller. “The Current team shares our view that progressive political news and commentary is critical for an intelligent and informed populace and we’re excited to be part of their growing line-up of talented news broadcasters.”

“The conservative stranglehold on morning cable news television in America is over,” said Bill Press. “Current TV and I share a common goal of cutting through the talking points and shouting heads to present sane, intelligent political commentary and analysis.”

“The Bill Press Show” – called “Full Court Press: The Bill Press Show” on Current — is a nationally syndicated radio program featuring Press addressing, commenting, and analyzing the issues of the day. Bill Press began his career as a political insider and media commentator on KABC-TV and KCOP-TV, both in Los Angeles. Over the years, he has received numerous awards for his work, including four Emmys and a Golden Mike Award. The former co-host of MSNBC’s “Buchanan and Press,” CNN’s “Crossfire” and “The Spin Room,” Press has built a national reputation on thought-provoking and humorous insights from the left side of the political aisle. Press is the author of six books: Spin This! (Atria, 2002), Bush Must Go! (Dutton Books, 2004), How The Republicans Stole Christmas (Doubleday, 2005), Trainwreck (Wiley, 2008), Toxic Talk (Thomas Dunne Books, 2010), and his latest, The Obama Hate Machine (Thomas Dunne Books, 2012). Press attends the daily White House press briefing and writes a syndicated newspaper column, distributed weekly by Tribune Media Services. “The Bill Press Show” can be found online at billpressshow.com or on Twitter at @BPshow.