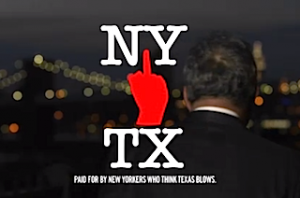 Lewis Black was back on The Daily Show last night for one his classic “Back In Black” segments, this time unleashing his rage on Texas Governor Rick Perry on behalf of all New Yorkers. Perry may not be running for another term as governor, but that hasn’t stopped him from running ads in Illinois, California and New York that try to lure businesses to Texas with promises of lower tax rates and looser regulations. Black took personal offense to Perry’s campaign, saying, “‘Don’t mess with Texas?’ No, Don’t fuck with New York.”

Black could give Perry a pass on his attempt to “steal jobs” from other states, but when the governor started running TV ads in New York, it was one step too far. “‘Texas is calling?’” Black asked, mocking Perry’s tagline. “Well good thing I’ve got caller ID. Listen, Texas, trying to steal jobs from Illinois and California is one thing, but you’re going to try to trash-talk about New York? Not on my watch.”

He decided to “fight fire with fire” and release his own highly-produced ad that began with significantly calmer narration. “This is New York City, the city that never sleeps,” Black said in the ad. “People come here from all over the world, for the freedom to live as they choose, for the variety of cultures, but most of all, for the fact that it’s not Texas.” From there, Black cut to a series of regular New Yorkers who could all agree on one thing: “Fuck you, Texas.”