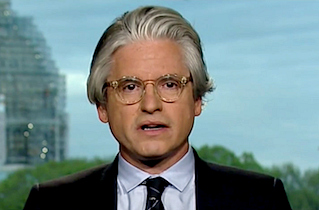 Media Matters founder and Hillary Clinton surrogate David Brock appeared on Morning Joe Tuesday morning to push back against the new book Clinton Cash: The Untold Story of How and Why Foreign Governments and Businesses Helped Make Bill and Hillary Rich, an investigation by the conservative writer Peter Schweizer into the Clinton Foundation’s fundraising while Clinton served as Secretary of State.

The book, which nobody’s read yet hurray, essentially alleges quid quo pro between the Clinton Global Initiatives fundraising and Clinton’s decisions at the State Department. The New York Times, Washington Post, and Fox News have all secured advanced access to the book, while critics say Schweizer is funded by anti-Clinton Super PACs.

On Tuesday Brock especially went after the Grey Lady, which has deviled Clinton in recent weeks with scoops about her private email server. Brock accused the Times of hiding Schweizer’s associations and previously shoddy journalism.

“The Times hyped the story, praised it, they withheld publicly available information about the author,” Brock said. “They noted that had he runs something called the Government Accountability Initiative, but they don’t say that that’s funded by prime funder of Ted Cruz’s Super PAC, by Donor Trust which is a Koch Brothers pass-through. So it’s subsidized by Hillary Clinton’s enemies.”

“The Times can look at this book, they can follow it up if they so choose,” Brock continued. “But don’t outsource your journalism to Rupert Murdoch’s publishing house.”

Later in the segment host Joe Scarborough did say that if Schweizer had connections like those Brock alleged they should be noted in articles about his book.