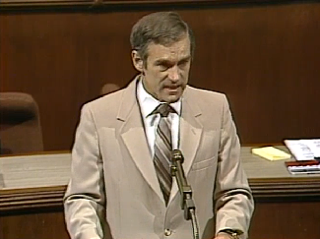 Rep. Ron Paul‘s detractors have raised many concerns about the longtime Congressman, but inconsistency has never been one of them. In fact, in old videos it sometimes appears that the Congressman raised issues that didn’t even exist yet– but would become a central part of his campaign. Take this short House speech from 1984, for example, in which Rep. Paul rails against “computer surveillance”– hardly an issue for most Americans at the time but, in a post-PATRIOT Act world, as important a theme as ever.

RELATED: Lt. Dan Choi Weighs In On Consequences For Soldier Who Spoke Out At Ron Paul Rally

While his concern on the House floor in 1984 appeared to be far from the threat of regular Americans having their privacy violated in the name of fighting terror, Rep. Paul proposes a similar premise to that which he does now against the PATRIOT Act: that government computers were used to keep records of Americans and compare lists to make sure that young folks register for the draft. That latter part is no longer an issue, but Rep. Paul appears to have some prescient words. “Computer surveillance seems appropriate for 1984 and, unfortunately, the wave of the future,” he notes in this speech, adding that surveillance was “a disgusting procedure for a professed free society” and lamenting that “it is so difficult to defend consistency across the board” for many.

With the Cold War in its waning years and the economic situation in 1984, for Rep. Paul to take the time to rail against computers is as typically Rep. Paul as it is interesting for another reason: by targeting the federal government, he was implicitly (or maybe not so much so) attacking President Ronald Reagan, something he has exhibited little fear of doing before. Either way, an insightful look into what Rep. Paul had been doing all these years in Congress, when, his opponents like to note, he hadn’t passed many bills himself.

The clip (via the wonderful and wonderfully organized C-SPAN archives) below: