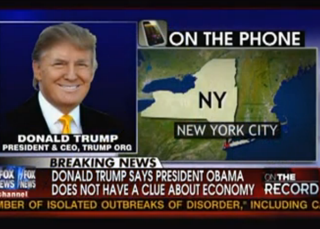 Was a situation in which Lawrence O’Donnell and Donald Trump agreed wholeheartedly even possible a mere few months ago? A mere hour after O’Donnell called Standard & Poor’s a “disgrace” for the “incompetence” that led to America’s credit downgrade on Friday, Trump visited Greta Van Susteren and used the exact same word, adding with some flair that the “publicity-hungry” leaders of the S&P are “loving this” and capitalizing on a “President who doesn’t have a clue.”

Trump told Van Susteren he felt even calling America “great” was “somewhat tenuous” in the current economic situation, admitting investors should be “very, very nervous.” He explained that he had “lots of experience” with Standard & Poor’s, predicting “these people are probably publicity hungry… they’re being heroes, they’re going off to their wives and boyfriends and… I think they’re loving it.” He went on to call them “losers” and “disgraceful” for the credit ratings they gave Lehman Brothers and other commodities that ended in failure. Trump also argued that their move backfired to some extent, as “people want to invest in our securities even though they’re not paying… and we have a President who doesn’t have a clue.”

Trump didn’t go into any detail as to where he got all that experience with S&P– neither here nor in his earlier appearance on Fox & Friends. It should be noted that Trump’s commodities have been no stranger to downgrades, experiencing at least one in each of the past two decades, some down into C-grade. Saying that he has had “lots of experience” with them isn’t quite the sort of disclosure that meets most journalistic bars, however– not knowing the nature of that experience puts the viewer in a bit of a disadvantage to judge Trump’s opinion of them. Needless to say the audience should not expect guests discussing an S&P credit downgrade to have the sort of adversarial relationship with the organization to have actually experienced a couple.

Trump didn’t dedicate his time exclusively to S&P, however, going after the Obama administration as well. Asked whether Treasury Secretary Tim Geithner should get the boot for this disaster, Trump did everything but flat-out say “yes.” “We’re not respected, we’re scoffed at, we’re laughed at throughout the world,” he argued, “you could really make the case that somebody new should go in there and give it a shot” (not him, though– sorry, Mike Huckabee). But he did try to find a silver lining in the entire ordeal. “If there’s anything positive about Standard & Poor’s [downgrade]… the President should call everybody back and cut a deal.”