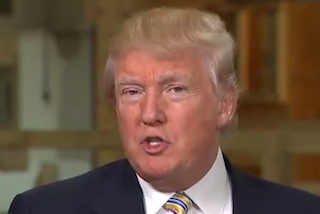 Donald Trump may never actually run for president, but that doesn’t stop him from offering some uncompromising criticism of the current and potential field of candidates. During an interview with ABC News this week, Trump played a “lightning round” of presidential word association with political director Rick Klein and easily came up with nasty things to say about everyone on this list.

On Jeb Bush: “Stumbling. I don’t know, I don’t understand this man. He’s stumbling like he’s not even a smart person. On simple questions. What’s going to happen when it’s complicated?”

On Marco Rubio: “I was so disappointed when I looked at his answer on Iraq. It was such a stupid answer and such a foolish answer.”

On Scott Walker: “He’s a good guy, but Wisconsin, as you know, is piling on debt over debt and that’s going to be, I think, a big problem for him.”

On Chris Christie: “I know him very well, he’s a friend of mine, but he’s got a lot of difficulties… with what’s going in New Jersey and with Bridgegate and with other things.”

And finally, on Hillary Clinton: “What she’s done with the emails is unbelievable. I think the book, the cash, is a big problem for her… I don’t think it’s going to be that easy for her.”

With candidates like these, Trump may just have to stop threatening in get in the race and actually do it.