Dutch Muslim Mayor to Other Muslims: Accept Western Values or Go Back Home 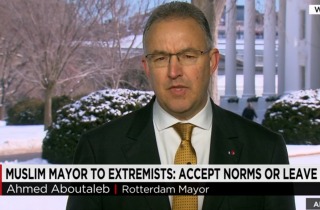 The Muslim mayor of a city in the Netherlands believes he has the authority to speak more directly on the subject of extremism. He did so this week by bluntly telling fellow Muslim immigrants that they either need to accept Western norms or go back to their original country.

Ahmed Aboutaleb, the Moroccan-born mayor of Rotterdam, appeared Wednesday evening on CNN International and further explained the sentiment behind his famous post-Charlie Hebdo attack remarks that “if you do not like it here because humorists you do not like make a newspaper, may I then say you can fuck off.”

“The Dutch constitution but also the Dutch society is constructed in very, very interesting basic value and that is tolerance and acceptance,” he told CNN’s Michael Holmes in a clip flagged by RCP. “So the moment you come to the Netherlands, wherever from all over the world and you get a citizenship then you have to at least underline and embrace the constitution and the values of the country.”

Asked whether it might seem “superficial” to tell people to “pack their bags and leave” if they don’t like Western culture, Aboutaleb continued: “It’s a free choice: Be with us, work with us together to construct a ‘we’ society. But if you want to send out of the ‘we’ community, you threaten us, you go to Yemen to learn how to use a Kalashnikov and to come back to citizen society, well, you are not part of my ‘we’ society. You’d better leave.”

Aboutaleb came to the Netherlands at a young age, telling CNN he spent 15 years in Morocco living off “one meal a day,” and “walking without shoes.” He also took a stab at the Obama administration’s suggestion that a growth in job opportunities may reduce radicalization

I know how it is to be a product of poverty, and I cannot accept that poverty leads to terrorism. Poverty must lead to a seek to knowledge, to sciences, to be better, to climb on the social ladder… It’s about investing in yourself, first of all, and by doing that, you invest in society. And that’s the message I try to give to these people, yes, indeed. I’m not only a mayor of a city, but I’m also Muslim and that gives me maybe the additional authority to say these things that maybe other colleagues of mine in Europe and maybe in the U.S. are not maybe authorized to say.

Watch the full interview below, via CNN International: