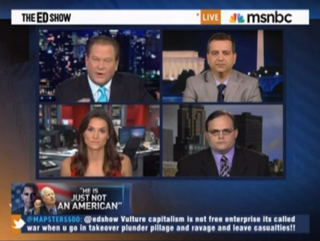 Ed Schultz hosted a fairly full panel today on a fairly incendiary topic: the birther movement and how Republicans appear to have, at least on some state levels, adopted elements of the far right into the establishment. The discussion on whether the birther movement was representative of the mainstream Republican Party went pretty smoothly, with most of the panel agreeing that some fusion had taken place. Then conservative talk show host Steve Deace mentioned the President’s jobs record, and all four people on TV started shouting at each other simultaneously.

It’s a fascinating panel, because the feistiest ones usually tend to be on things like the birther movement, where entire parties are painted in the color of its ideological extremes. Instead, the discussion about the birther movement here was tame– but when it came to jobs numbers and similar empirical policy talk, the panel just didn’t get along.

Panelist Chris Kofinis kicked off the discussion on the birther movement and its resurgence, something he called “crazy” and the product of a “tin foil brigade that doesn’t even pass the laugh test.” Krystal Ball agreed, adding that “there is a racial component to this” that could not be ignored. Schultz agreed, asking Deace why he believed the topic was resurging. “For the same reason on the other side we saw conversations about, Bush lied and people died, Bush wanted to go to war in Iraq to get revenge on his dad,” he replied, attributing it to “a clash of worldviews.”

“This is not a worldview, these are facts,” Schultz replied, to which Ball agreed, adding that she believed the problem the Republicans had was that they had “engaged in a short term strategy to ride the hatred and anger of the far right Tea Party.” Kofinis asked, “When was the last time someone questioned whether the President was an American?” (The answer? Chester A. Arthur, who some thought to be Canadian). Kofinis asserted that the topic “puts a bad taste in a lot of people’s mouths.”

Deace then noted that many people did not agree with the comments Schultz made about President Obama turning the economy around. Somehow, in a segment about the most incendiary topic in politics today– the fact that some people insist the President’s birth certificate is a forgery, based on nothing– all it took was challenging President Obama’s economic record for all hell to break loose.