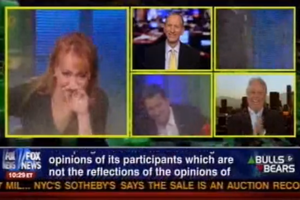 Today’s Bull and Bears panel– one of several Saturday morning business shows on Fox News– was hot. Not so much in that the debate was particularly heated, or that it exuded an overwhelming aura of sexiness, but that insurance companies are charging so much to put out car fires that a panelist felt the need to set off a fire extinguisher on the set. Hilarity– and lung irritation– ensued.

Going through their future predictions in both stocks and politics (yes, the triumphant return of Bill Clinton was on the tip of everyone’s tongue), the panel was the usual fare of animated agreement and contention over various stocks in which people should invest, or the respective wisdom of certain political moves by public officials. The aforementioned Clinton and Walmart took up most of the discussion, until it was Eric Bolling‘s turn to provide some insight, and all he could think about was the fact that certain fire departments want to start charging to respond to car accidents. “You guys heard about the New York City Fire Department wanting to charge for calls to accidents?” he asks, before adding, “You better have car insurance; Allstate– they want to charge you $400 bucks just to do this to the cars.”

Then he unleashed a cloud of chemical smoke on the entire studio, necessarily ending the conversation, as all the other guests coughed and helplessly swatted at the thick mesh of extinguisher gas in front of them. The shot of Bolling actually letting the extinguisher rip is as comical and bizarre as anything of this genre (Stosselian Cable News Surrealism, let’s call it), but the greatest scene in this entire clip is the panel shot. In all the boxes where the various pundits should be present hang instead ominously dark clouds with an occasional hand poking through– and in Bolling’s box, the bright vermilion of the fire extinguisher mocking the dark blue haze. As this occurs, the automated business program disclaimer scuttles innocently across the bottom of the screen, like an insect curiously inspecting the scene of a nuclear bombing. One of the panelists just gets up and leaves, and the host uses the few breaths she has left to cut to Neil Cavuto.

Or maybe it’s just a bunch of business commentators having a good time while making a solid point about the value of car insurance. Feel free to take as much poetic license on this one as you choose. The entire clip via Fox News below: