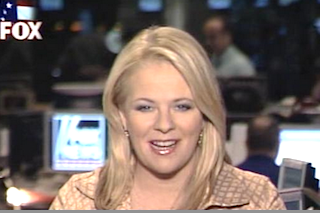 The Hollywood Reporter is reporting that Terry Keenan, a news anchor who previously worked for both Fox News and CNN, died suddenly Thursday night. Additional details on the cause of death were not immediately available. Her age is unknown.

Most recently, Keenan worked as a business columnist for the New York Post. But before that, she hosted Cashin’ In on Fox News from 2002 to 2009 (currently helmed by Eric Bolling). Keenan also spent time at CNN and later CNBC in both on and off-camera roles between the years of 1986 and 1998.

She was married to Ronald Kass and leaves behind one son, Benjamin.

It is with tremendous sorrow that we report the passing, due to a massive cerebral hemorrhage, of a wonderful mother, wife, sister, and pioneering financial journalist. Terry was a trailblazer who credited much of her success to her beloved mother’s emphasis on education, which led her to Holy Names Academy in Albany, NY, and a math scholarship to Johns Hopkins University. At Johns Hopkins, she produced the iconic PBS show Wall Street Week with Louis Ruykeyser; Ruykeyser, recognizing her very rare combination of talents – a flair for words coupled with an amazing facility with numbers – became a mentor. Soon she was picked up by CNN’s Moneyline, hosted by another longtime mentor, Lou Dobbs. Terry reported on the 1987 stock market crash, and was the first journalist to report live from the New York Stock Exchange. She went on to have various anchor stints at CNBC and Fox News. She left Fox to work on her most cherished production: her son Benno Kass, with husband Ron Kass. She treasured every minute with her son. Throughout her post-TV career, she never missed a deadline for her weekly New York Post financial column. Aside from her son Benno and husband Ron, Terry leaves behind her two sisters, Joellen Gardner and Linda Keenan, as well as many nieces and nephews.

[Note: The headline of the article has been changed to reflect the cause of death.]