Fox Guest Slams Rodeo Clown Uproar: Liberals ‘Get to Talk, Everybody Else Shuts Up’ 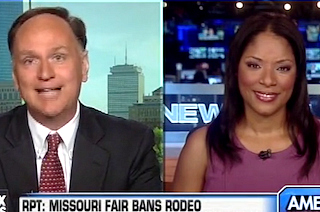 On Fox News Wednesday morning, talk show host Michael Graham and columnist Zerlina Maxwell sparred over the Missouri State Fair’s use of a rodeo clown dressed like President Barack Obama, with Graham dismissing the bit as “a bad joke,” and Maxwell arguing that it tacitly encouraged violence against the president.

“Oh, my gosh, somebody making fun of a president?” Graham said. “That’s never happened before! I’m so glad when George W. Bush was president we didn’t see people with banners with him with a Hitler mustache, and plays on stage off-Broadway calling for his assassination. I’m so glad when Lincoln was president there weren’t cartoons portraying him as ape—oh wait! They were. Folks, it’s a joke. That’s all it was.”

“We’re not calling for a March on Washington, but it’s not funny,” Maxwell countered. “This president has received more threats than any president in American history. And I think it’s interesting that you compare it to Abraham Lincoln. Are you sure you want to do that?”

“At parade in the 1980s in Philadelphia, the guys who were sweeping up after the animals were wearing Reagan masks,” Graham pressed. “They were scooping up horse poop in Reagan masks! I don’t remember a single reporter going, ‘Oh my gosh, we made fun of president.'”

“You keep comparing it to presidents who have been shot, which is interesting,” Maxwell said. “I think there’s one standard. We shouldn’t do this with any president. I don’t think it’s appropriate for us to do it when it’s the President of the United States. You can disagree with his policies, but why are we mowing him down with a bull? Why are we cheering that?”