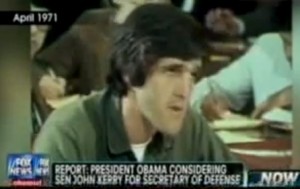 The first post-election political news cycle began with reports that President Obama is considering Sen. John Kerry as his next Secretary of Defense (and Ambassador Susan Rice for Secretary of State), which prompted Fox News to take the reasonable step of summarizing the 2004 Democratic presidential nominee’s smearing at the hands of Swift Boat Veterans For Truth, a campaign that became political shorthand for vicious political dishonesty. Less reasonably, Fox presented the Swift Boaters’ allegations with credulity, and even less reasonably, did so during the network’s “hard news” program, America Live. Host Megyn Kelly introduced Trace Gallagher‘s report by saying that the “controversy” centered around a group of veterans who “challenged his record as a war hero.”

“There are reports that Senator Kerry is being considered for Secretary of Defense,” Kelly began. “He was also at the center of a controversy during his own 2004 presidential run when the Swift Boat Veterans for Truth group challenged his record as a war hero, and slapped his testimony before a congressional committee claiming it was false and misleading. But the controversy goes back even farther than that.”

Gallagher’s report, as it turned out, had nothing to do with the Swift Boat attacks, so Fox News viewers were left with the impression that there is something “controversial” about John Kerry’s heroism during the Vietnam War, and that a group of his fellow veterans presented a legitimate “challenge” to that heroism. In fact, there is absolutely no controversy (dispute/debate) about the acts of heroism which earned Sen. Kerry three Purple Hearts, a Silver Star, and a Bronze Star, from anyone who was actually there.

Trace Gallagher’s report, which had more to do with Kerry’s anti-war activism and a gaffe he made during the 2004 campaign, wasn’t really “fair and balanced,” but at least steered clear of legitimizing the Swift Boat attacks. Should Sen. Kerry’s nomination for Secretary of Defense materialize, Fox viewers can expect more of this, and lord knows what they have in store for Dr. Susan Rice.

Unlike many other Fox News critics, I still prefer to take them at their word that there is a separation between “opinion” and “hard news” at the network, and that someone there cares about enforcing it. When that separation is breached, the reputations of serious journalists at the network are severely undermined, and they have no recourse. They can’t protest, they can only soldier on, or quit.

For them, if for no one else, Megyn Kelly should apologize to Sen. Kerry, and correct her characterization of the Swift Boat attacks.