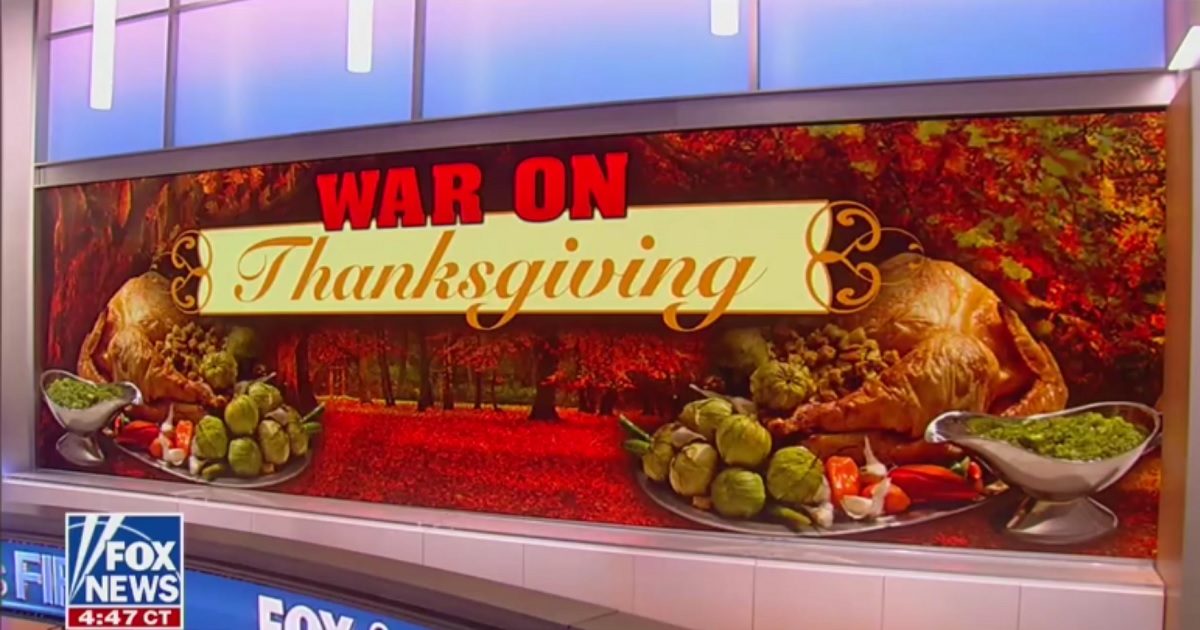 It’s that time of year again when Fox News viewers are encouraged to tool up for the latest holiday combat skirmish, this week manifesting itself in a “War on Thanksgiving” that was promoted across several Fox News programs, and based on a premise that’s thinner than the blade on your carving knife.

It all began with a Huffington Post article that literally says “No one should be discouraged from enjoying the holiday or celebrating with family and friends,” fighting words if you’ve ever heard them.

But the article was stuffed (sorry) with suggestions on how to reduce the carbon footprint of your Thanksgiving celebration that included not traveling for the holiday, and sauced with facts about the environmental impact of turkeys.

The author suggests you “Consider Taking The Turkey Out Of The Turkey Dinner,” but also notes that ” that turkey is better than other meat, such as beef” when it comes to carbon footprint.

Media Matters editor-at-large Parker Molloy tracked the evolution of this one article into a full-blown War on Thanksgiving on Fox News.

It's amazing to watch this channel just make things up and then get really angry about it pic.twitter.com/em9DcWS6Ds

"When I heard this, all joking aside, I got viscerally angry because to me, this is the latest attempt to tear down an American tradition that was fine and didn't need any help," he says about an article that doesn't say what he claims it does. pic.twitter.com/5MBX1Un7Ws

"The left isn't just demanding that you give up steak dinners and plastic straws. Now, over at the Huffington Post, which really is the most ludicrous news site on the internet, are demanding you cancel Thanksgiving dinner, too," he lies. pic.twitter.com/7cjRCJKVi7

"Liberals are coming for your Thanksgiving turkey!" pic.twitter.com/rrTnyA7fck

All of this is just amazing. Someone wrote a blog post that was like "Hey, here are some tips if you're looking to reduce your carbon footprint this Thanksgiving," and Fox has been going on about it for three days now, misrepresenting it as an attack on Thanksgiving as a whole. pic.twitter.com/KukwmJTIvq

This stuff even gets covered during the "straight news" shows. Here was the 11/5 "real news round-up"

1. WaPo doesn't endorse enough Republicans
2. They're comin' for your turkey
3. A transphobic video got pulled down for blatantly violating YouTube's policies, censorship! pic.twitter.com/YiobkinUDq

The goal of segments like these, picking *these* stories and framing them in *this* way, is to plant seeds of resentment among its viewers, to make them feel like they're under attack. https://t.co/utrreS50aa

Just think, only 21 more shopping days until Fox News viewers are redeployed to the War on Christmas.