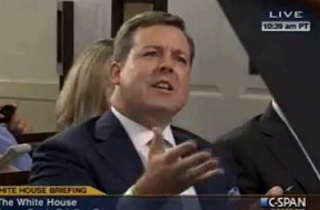 The bone-chilling murder of 22 year-old Chris Lane, an Australian attending college in the U.S. on a baseball scholarship, has been taken up by the conservative media as some sort of rejoinder to the killing of Trayvon Martin. At Wednesday’s White House daily briefing, Fox News’ Ed Henry asked Principal Deputy White House Press Secretary Josh Earnest about the case, and like his “opinion-side” colleagues at Fox and Friends, misidentified the suspects as “three African American young men,” when one of the suspects is, in fact, a 17 year-old white male. Like many on the right, Henry also made an explicit comparison to the Trayvon Martin case.

“Do you have any reaction to the Christopher Lane case?” Henry asked, to which Earnest replied, “I’m not familiar with it, actually.”

“In Oklahoma, this 22-year-old Australian — 22 or 23, I’ve seen different reports — baseball player, came from Australia, was targeted apparently by three African American young men who — the Australian was out on a jog and these young men apparently told the police they were bored and they thought it would just be fun to kill him,” Henry explained. “Any reaction to that?”

Earnest replied that “this sounds like a pretty tragic case,” but that “I wouldn’t want to get ahead of the legal process here.”

He added that “the President, I think, himself has spoken pretty eloquently about violence in our communities, and he stood at this podium a few weeks ago where he talked about his concern about the impact that violence is having on, in particular, young people in this country.”

Henry persisted, asking “Why hasn’t he spoken out on this, in this case? You said there was a judicial proceeding; there was one in the Trayvon Martin case. He spoke out extensively on that one.”

Earnest pointed out that the President’s initial remarks on the Trayvon Martin killing were brief, and in response to a direct question, and that the President also spoke “at the conclusion of the legal proceeding, where he expressed his concerns about the impact of violence in communities all across the country, and he talked about the number of things that the government can do but also a number of things we can do in our communities, whether it’s parents, churches and communities can do to try to address the impact of violence, and whether there is more that we can do to try to protect our children.”

Aside from demonstrating that Ed Henry would be better off getting his news from Mediaite than from Fox and Friends, there’s a fascinating detail about this question. As I’ve noted before, reporters often ask questions at briefings on behalf of colleagues, especially TV reporters. I don’t know if that was the case this time, but I’ve known Ed for a long time, and like his colleague Wendell Goler he’s a good reporter who’s not prone to this kind of error. If he had seen that Fox and Friends report himself, Ed definitely would have noticed that the suspect in the photograph was white. Additionally, I’ve never known Ed to read WorldNetDaily, or anything like it, so the wording of his question caught my attention: “was targeted apparently by three African American young men,” a phrase that hewed closely to the original wording in WND’s story, and no one else’s, at least not that I could find.

I could ask Ed Henry if someone put him up to asking that question, but he wouldn’t be able to answer me if he wanted to. What I do know is that this is wouldn’t be the first time that Fox News has undermined Ed Henry, who is a respected journalist and President of the White House Correspondents Association. Reporters like Ed rely on Fox News’ wall of separation between “opinion” and “hard news” to protect their reputations.

As for whether the President should speak about this case, I do believe there’s a compelling reason for him to do so, but it has nothing to do with the racial angle that conservatives are pushing every time a crime with a white victim happens. The shooting has resulted in calls for a tourism boycott of the United States, which former Australian deputy Prime Minister Tim Fischer explained to CNN’s Piers Morgan by saying “People thinking of going to the USA for business or tourists trips should think carefully about it given the statistical fact you are 15 times more likely to be shot dead in the USA than in Australia per capita per million people.”

If given the opportunity, the President should try to think of some way to reassure tourists that they are safe in America, if he can, or explain what steps are necessary to achieve that. A boycott like this, if it were to spread, could inflict serious damage to the U.S. economy. The White House has not yet responded to a request for comment on the boycott.