Fox News Movie Critic: The Interview Is ‘Just OK’ But Everyone Should See It
VIDEO

Fox News Movie Critic: The Interview Is ‘Just OK’ But Everyone Should See It 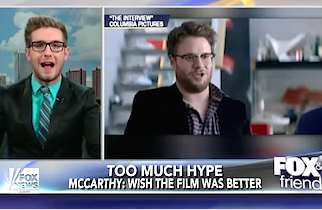 With The Interview finally hitting theaters and living rooms this past week, Fox & Friends sent its resident film critic, Kevin McCarthy (not the House Majority Leader) to see the movie and report back on what all the hype was about. The founder of nerdtears.com said he was torn because while he thought everyone should go see the movie to stick it to North Korea, he did not actually like it that much.

McCarthy began by saying he thought Sony Pictures’ decision to pull the film from theaters set a “dangerous precedent” for “artistic expression” in this country, saying, “We should never be told that we can or cannot go to a film based on threats.”

That being said, while McCarthy though Sony’s decision to reverse course and allow a limited theatrical and VOD release of the film was a “great thing” he thought the movie itself was “just OK.” He loved the first 15 minutes, but thought the middle section was over-long and James Franco was “over-acting” at times.

“Overall, for me, the film was very underwhelming,” he continued. “And as a movie critic, it kind of sets a weird thing, because I want people to go to theaters to see it to show that we don’t give in to threats, but on the other hand, the movie is really just OK.”

Final rating? Two and half stars.

McCarthy’s dilemma, which echoes Donald Trump’s assessment that Sony was wrong to pull the “terrible, terrible movie” he had not yet seen, exemplifies the problem with turning a Seth Rogen comedy into a nationalistic cause. While Americans should be allowed to see the film, that doesn’t mean they should feel some patriotic duty to do so.