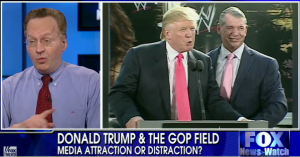 The Fox News Watch panel attempted to determine whether Donald Trump was an attraction or a distraction for the media and basically concluded the symbiotic relationship is both good for ratings and good for Trump. Yet although the conservative panelists enjoyed Trump arguing with many in the “elite media,” the liberal commentators worried journalists were wasting their time treating Trump seriously.

Kirsten Powers argued “the minute he started with this Birther stuff he should just be ignored” and given many of his other “crazy claims,” thought he should no longer be treated as a serious person. Jim Pinkerton disagreed and suggested Trump is raising other significant issues that “nobody in the elite wants to address” like what are we still doing fighting in Afghanistan? Furthermore, after showing a clip of Trump’s agitated interview on Good Morning America, Pinkerton declared:

“Trump is obviously good television. He’s saying to George Stephanopoulos and all the rest of them exactly what 2/3 of the American people would like to say which is ‘why are you these little arrogant snots making millions of dollars telling us what to think?'”

Rich Lowry agreed that Trump’s best characteristic so far might be his eagerness to take on anyone in the media. Lowry thought “the more disdain [Trump’s interviewers] show for him and the more combative with him they are on the air, the better it is for him . . . people hate the media, they hate the establishment and even if this guy is a braggart and a joker and obnoxious, they love to see him sticking his finger in everyone’s eyes.”

Plus there’s something purely entertaining about watching someone so unpredictable and willing to say anything at anytime. Yet it remains to be seen whether Trump’s unique personality that makes him such a huge television draw would be able to be translated into any type of political success.